It’s safe to say that food is an important part of our lives. A varied, balanced diet is what most of us aim for but, because of the life we lead, healthy eating is one of those things we tend to neglect in spite of being aware of its importance. Ada Parellada, writer and the owner of the restaurant Semproniana, just published a book called: LA COCINA SOSTENIBLE (Sustainable Cuisine), which seeks to give visibility to one of the most significant issues nowadays: the amount of food we throw away but could actually still be used. 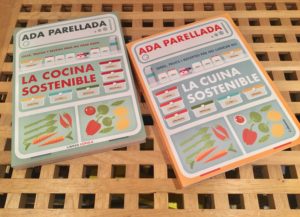 One day I was leaving the office late, quite late, and I saw that the bakery next to my agency was closing; I also saw the bags of food they were about to throw away and my soul hurt when I thought of all the people that food could feed. I couldn’t help it, I approached the girl and asked her why they wouldn’t give the food to people in need or to a soup kitchen, and she replied that the owners of the franchise had forbidden them to. Before the ban was set, she said, there had been cues of people from the neighbourhood waiting to take that food home, but as soon as her bosses realized what was happening they immediately forbid it because of the poor image it gave. I was stunned, and I still am, because I cannot understand what can lead someone to prioritize ‘image’ over helping someone who doesn’t have anything to eat. Ada told me she wanted to write a book to teach people to reorganize their kitchen and make it more efficient and effective; she wanted to teach people to make use of what they cook, not just what’s left over but also to optimize the food they cook and how they do it. I thought it was a place to start, a first step towards showing families, bakeries and restaurants that there’s no need to toss out so much food.

However, I still had in mind that girl throwing away fresh food, and that ‘monsters’ was the nicest you could call those restaurant and franchise bosses for not thinking about other people. But while reading this book I’ve realized that giving is not easy; I’m sure there’s a lot of owners of food-related businesses that would give away the spare edibles but that aren’t able to, because it demands a certain amount of human resources, logistics and space that many don’t have, and can’t have access to. Social entities lack the capability to store and transport the amount of food that isn’t used, and they also don’t have giant refrigerators to keep it fresh. Therefore, until the Food Security Act changes, there will always be a refusal to give fresh or pre-cooked food away because the provider is responsible in case the edibles they provide cause food poisoning.

As always, laws set the course, and we know changing one in our country is hardly possible; even if it would benefit a lot of people that can’t provide a proper diet for themselves. I understand this situation is like a snake biting its own tail so, for now, a book like this, with which we can learn not to waste food, is a good start. It is also the first complain to this Act, the modification of which would help so many people. So I encourage you to buy it and to put into practice the tips that this excellent cook gives us. And you know they’ll be good because she does think about people and will always do.