REGAIN WIT AND COURAGE TO KEEP ON GOING

In today’s society, I am not certain if courage and wit would be two of the virtues that I would highlight from among most human beings. During the times of King Arthur, on the other hand, the bravest were the ones that held other’s acknowledgement; the ones that fought for what they believed until they died, and for what they were told to defend. The ones that weren’t afraid, even when their lives were in risk, those who took action for conviction, because it was their duty to reach the end. Wit was also valued: those who were smart, or the good ‘sneaky’ ones, were the people who survived within the society of the times, in which hierarchies were extremely defined, rich and poor. But the witty ones also had a good weapon in a world filled with corruption and badly handled power, like today.

It horrifies me to turn the TV on and watch the news, given the fact that this world is full of even worse than ‘sneaky’ individuals, and the worst of all is that we have to put up with them all. However, there are very few brave people, or honored people, that can reach the top without converting to the ‘dark side’. It is a pity that so few are actually authentic, brave and willing to fight for what they believe. New generations have it all, and maybe it is our fault if they don’t value many of the things they owe and don’t know how to fight for them. It all comes given to them. It is for this very reason that I think a reading like the saga I present here can help new generations to see the importance of values within a community, a kingdom, a society, which is not that different from the one in which we live today. And through Arthurian myths, we can make these new generations see life from the perspective of effort, the need to fight for things, and teach them that life is about ‘giving and receiving’ and not a unidirectional pathway. 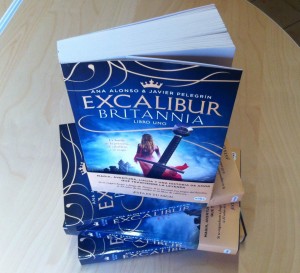 THE BRITANNIA SAGA is a big bet, an epic story, full of magic and adventures that will take the reader to unique places, where courage and wit are fundamental to save life and honor. In this first volume of THE SAGA, Gwen is the daughter of queen Igraine, and Lance is a knight of the court. The princess, heir of the throne, is in big danger because Saxons have entered London and want to conquest the kingdom. Merlin (the famous magician) and Uriens have designed a plan for the princess to escape safe and sound. But in the darkness of the city, behind every corner, the spies of the Saxons are aware of a salvation plan that might be harder to execute than the magician believes. For all of you who enjoy Game of Thrones and The Lord of the Rings, this saga is not going to deceive you, you will devour the book but keep calm, there are still three other books to come and understand the great times of King Arthur and the Knights of the Round Table.