Violence is unacceptable. Since I was a kid, I’ve been taught that nothing can be achieved through violence, hence why we’ve always believed in the power of dialogue and this may be the reason why I completely understand lots of the things that are going on right now. 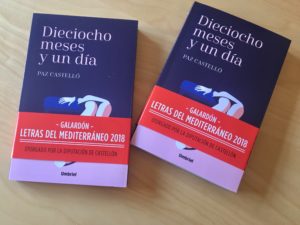 The News are filled with violence, that is a given, but unluckily, Gender Violence is the top topic, it is the news we’ve had to deal with the most. And this is one of the key points in Paz Castelló´s new novel DIECIOCHO MESES Y UN DÍA, awarded with the Letras del Mediterráneo Award this 2018 and published by Umbriel. The plot sets with Sabina, our main character settled in Peñíscola, who witnesses her best friend being murdered by her ex-husband. She gets sick and does not know how to handle something like such a tough subject.

Sabina, after her best friend’s death is not able to leave her apartment, SHE SUFFERS AGOROFOBIA, and her only aim and obsession is to make justice. Paz writes amazingly well, her social networks are followed by 2.300 followers on Twitter and 4.400 on Facebook, and, she is able to combine her good writing with powerful topics, as those she presents in this thriller, in which she is able to make the reader feel the pain, the fear and the madness as if the reader was struggling with it too. It is not simply another novel, since it has the two ingredients a good literary thriller must have. This title could also be referred to as a “Domestic Thriller” since the main character prepares a revenge which will make many tremble as we run out of air, as Sabina does. Breathing gets harder as we go on reading. A perfect balance between a commercial and a literary novel, which deals with one of those topics which are the more worrying in our society. GENDER VIOLENCE. Once again this Alicante’s author nails it, and is making her way through in this Publishing World to the top.