LIFE IS A GIFT

I’ve learned that you have to learn to behave in life. Respect everybody’s opinion, which doesn’t mean agreeing with them, but listening and accepting them even if your opinion is completely different, or even opposite. We have to learn to live with different kinds of people, with different views, but most of all with respect. One of the big debates is about what we call alternative; if homeopathy is good or bad, if what’s spiritual and natural is better. The truth is that I’ve always been interested in this world of the intangible, less scientific, without being extreme, because I always think that extremes aren’t healthy. This is why, when Gaspar Hernández suggested writing a book following a Catalan, Enric Corbera, who travels around the world saying that “nothing is real” and “we live in a dream”, I was equally surprised and excited. It’s true that I thought it wouldn’t be an easy book and even less so with just two hands, but Gaspar Hernández, author of EL SILENCIO, which sold more than 60000 copies, and LA TERAPEUTA, a novel that’s still alive in the market and is catching more followers because it’s the first novel that speaks loud and clear about ANXIETY, has managed to perfectly portray this  personality who’s not very known here, but a lot in Latin America, where he fills auditoriums, and whose Youtube videos have thousands of views. 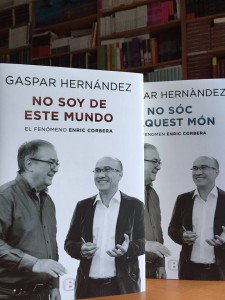 The book NO SOY DE ESTE MUNDO/NO SÓC D’AQUEST MÓN published by Ediciones B, is a journalist work by Gaspar where he explains cases lived in the first person. He shows interest for non-duality, the Advaita, and the book “Un curso de Milagros”, and he investigates up to what point, Enric Corbera can perform miracles, like a lot of his followers claim. However, Corbera is also followed by doctors and his method is taught in universities in Latin America, but even so there are lots of people who think ¿Miracles? Those don’t exist. ¿Another enlightened one? ¿A guru who’s praised in Latin America because they believe in the supernatural more? These questions fill up this book, which shows a way of seeing life that’s radically different to the majority.

A spiritual diary, of the intangible. It’s difficult to explain, yes, but with this book you can check where the study comes from, what sources feed it and testimonies that live a life they may have not been able to live otherwise. A book that will open up debates, like I did in today’s blog, but that at the same time, gives an alternative, hope, for those who are in a vita finito moment. A journalistic and objective view of a method that everyone is free to follow or not, but that we should all know exists, before quitting.  There’s not a more precious value than each person’s life and we’re each is free to handle it however we want. And what’s most important is that I think we have the duty to respect it.