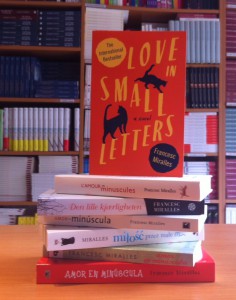 It’s an honor to be able to be here, next to Francesc, supporting him, applauding this novel that we’ve worked on for a lot of years and that hasn’t stopped paying off, because none of us have ever put it aside. It came out on the 27th of January in the USA and in a few hours they will start working on the second edition.

It’s true that in the United States everything is large scale, even the book world, but with reviews like these in BookPage, Bookwinked, Two Classy Chics Chat, Four Chicks Flipping Pages or in Undeniably {Book} Nerdy, who can doubt that they’ll fall in love with Mishima? A stray cat that’s able to change Samuel’s losing path. Both characters will charm the reader and, without even realizing, he’ll feel better, more complete.

A moving story, fun and intelligent that won’t leave you indifferent and will make you end up with that great feeling of I loved it and I want more. And then, you can go look for WABI-SABI, which is in Spanish, but not in English yet, but we are here to keep fighting. Congratulations Francesc Miralles, you have really earned it.