AT THE OTHER SIDE

The world as we know it has managed to impress me. I have always thought the world moves in one direction and I in the opposite one. I sometimes feel as the “weirdo” because I don’t understand many of the things that are happening, at all levels. I understand that if we were to start discussing political problems in the world we would never come to an end. Personally, however, I can barely understand what is going on here, nor anywhere out there, but sometimes I struggle to understand reactions, everyday situations that I would face in a very different way from what most people seem to do. I think we are losing important values like trust and honesty, fidelity and compromise. I do not wish to generalize, it’s never good to do so, but I have recently lived such scenarios, where all those values are lacking, in the flesh. And I must say that it makes me profoundly sad. It is precisely then that I allow myself to be carried away with my thoughts, that take me straight to books. I would not have it any other way. Now I am lead into another world and I try to believe in a parallel universe, maybe the one that Sónia Fernandez-Vidal, one of my greatest authors, is trying to tell me about. The quantum world. 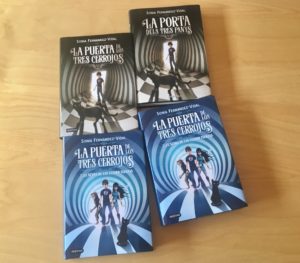 I would like to cross the Door and walk into another place, where things had a different explanation. The physical one might not be the one to help me, in this case, but Nico, the main character of Sónia’s first book LA PUERTA DE LOS TRES CERROJOS, already had an adventure in this parallel world. It captivated teenagers and sold more than 250.000 copies when science fiction books were not a trend, just like now. A huge record that has lead Planeta to publish a second title, LA SENDA DE LAS CUATRO FUERZAS with a new adventure awaiting for Nico, where he tries to reunite with his friends from the other side, but isn’t able to. The entrance to the quantum world is gone until Quinoa, his quantum fairy, comes seeking his help. The laws of physics are out of control and it will be Nico’s and his friends duty to reestablish the balance. In this new quantic adventure Nico will face tests from each and every one of the forces that reign in our universe.

LA PUERTA DE LOS TRES CERROJOS and LA SENDA DE LAS CUATRO FUERZAS are two extraordinary books with science as the back scenario in order to introduce us to the quantum world, which is not easy, but appears to be so in the books. The magic of a special, intelligent author, named one of the most creative minds in the world by Forbes, turns difficult into easy, and boring into thrilling. Can we ask for more from a book for our teenagers? Understanding the world of the intangible is a step forward, and today, perhaps, having an open mind and getting back the lost values is a true necessity.