WRITING IS LIKE KEEPING A TRACE OF OUR FEELINGS

Reading and writing are two things that seem connected, although they don´t have to be. However, in my own life, they have always been linked because reading was an important part of my childhood, and now it´s part of my life not only as a hobby, but also as my job.  What more could you ask for? And writing is another of my hidden sides, because I actually love to write, but for myself, as a release. WRITING is difficult, it´s an art, but we can all keep little notebooks or diaries. It is a way of capturing the feelings, the emotions, and all the things that, for some reason, affected us inside. 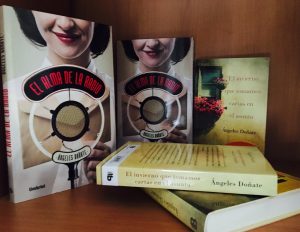 For this reason, I fell in love with Ángeles Doñate´s book, EL ALMA DE LA RADIO (The Soul of the Radio), which Ediciones Urano/Umbriel have just published. It´s a tribute to a radio program that was huge in Spain, which the Spanish readers will recognize, but it could be applicable to any country. There is nostalgia in this intimate, amazingly well-written novel, which tells the story of a radio presenter who replies to love letters on air, as well as the stories of some of her listeners, who cross paths by falling in and out of love, by being poorly treated, or by feeling lonely in the end-of-Francoism Barcelona, when democracy was emerging. When Aurore becomes the new voice of the most-listened radio program, she has a big responsibility. On one hand, she must prevent Elisa – a seventeen-year-old girl who announced she was going to take her own life – to kill herself. On the other hand, she must fill the lives of solitary people like German, who listens to the show daily. But what nobody knows is that Aurora is as unhappy as many of her listeners, and that she´s broken-hearted too. One day, as she wonders what happens with the letters which don´t make it to her show, she discovers the studio burns them. Many of them show an unpleasant reality, full of domestic violence and political repression which the studio doesn´t want to see associated with the program, in order not to lose listeners. Outraged, Aurora takes home as many letters as possible to reply to them on her free time. She wants to help those who need it, no matter what is going on, and whether or not the big shots managing the audience like it. After many years of emotional void, she finds a meaning to her life, which is just listening to others.

With this novel, Ángeles Doñate demonstrates again how much of a great writer she is and how well she knows how to touch our heart. She did so in her first book, EL INVIERNO QUE TOMAMOS CARTAS EN EL ASUNTO (The Winter When We Decided to Act), which has been translated into 8 languages and has been bringing us a lot of joy. Two years after publication, we keep selling it across the world because it is about complicity, honestly and love. In Spain, the pocket edition, published by Ediciones B, is still available and I can´t recommend it enough. It reminds me of the movie Pay It Forward, which I loved. It has become one of my favorite novels, and I feel proud to represent it. I know that we, readers, receive this book with our arms open, and all we can do is to say “Thank you, Ángeles.”