WHEN A BOOK MANAGES TO HAVE US GLUED TO THE ARMCHAIR

I have to admit that the tickling you get when watching a horror film, just when you know something is about to happen that will force you to scream, is that little something that keeps you hooked to the screen. The same happens with a book, although it is somehow more difficult to create that atmosphere that images can give you, unless the writer is a master in the subject. Well, I am proud to say that Malenka Ramos is such a master. She proved it with her LO QUE HABITA DENTRO, which gave her the distinction of being the Spanish Stephen King, and now, with EL QUE SUSURRA she manages to have the reader under an avalanche of thrills from beginning to end. I assure you there were moments where I preferred reading the novel accompanied because I was too afraid to do so by myself as the tiniest noise startled me. I got into this novel like I have seldom experienced. Those who love this genre are going to love this, as long as they have a pillow nearby to make hold of it. 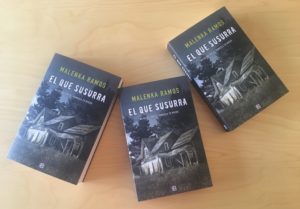 A little town, Point Spirit, with a sawmill, is going to experience a series of changes that will forever change their lives. A death at three o clock in the morning, an old hall clock that stops at that precise time at the Morelli sisters’ house. The night turns darker and Mrs Owens heard a knock on her door. The sheriff was looking at a light by the sawmill, he could not manage to sleep that night. And in a recently rented cabin, Jim Allen, the writer, slept like a baby, and that’s why he didn’t see the shadowy figure that went by his window. Penny had died precisely at three o’clock in the morning, when it all started.

I can’t tell you anything because I would spoil a great deal of the book, but you can deny that this tiny summary draws your attention into the novel. An addictive read for the summer that I am sure will have you holding your breath and eager to know more about this asturian writer that deserves a chance to grow bigger and expand her talents. There aren’t many women writers that focus on this genre in our country, and I think they deserve all our support, because it is not easy to make it in a generally masculine field. So, female readers and female publishers of the world, let’s come together and give the chance to a female writer who masters a thrill like nobody else and who will reach an immense audience if we push for her, starting now.