TRUTH IS STRANGER THAN REALITY

On Tuesday, a ceremony was made to remember the 20th year of Miguel Ángel Blanco’s murder by the terrorist group ETA. When I saw the news, I couldn’t help but remember it, and it was very surprising because it was something so shocking at that time, that I still know by heart exactly what happened in those 48 hours. I felt the anger and indignation you have when realizing people are capable of doing something like that and, at the same time, I get goosebumps when I remember people’s reaction. In Barcelona, many of us who went out on the street so they knew that there was a majority of us who solidarized with the family and believed, as I did, that they wouldn’t be able to kill Miguel Ángel Blanco after everything that had happened. But, unfortunately, they did, and I remember driving in my car, I don’t know exactly where, listening to the radio when there were only a few minutes left until the execution. When they confirmed that he had been killed, I couldn’t hold back the tears. I didn’t understand that wickedness that cold blood, and I’ve never had. At that time, 20 years ago, when I was way more visceral than now, I wished the worst for those people that were capable of killing a normal, innocent person because of an ideology. It seems something from a movie, a noir novel, but it was real and it left me a scar. Today, remembering it, I’m still moved at people’s solidarity. There were many of us who didn’t understand nor approved that violence and I think to myself: I wish this had been a novel that I had to read, and not the reality. 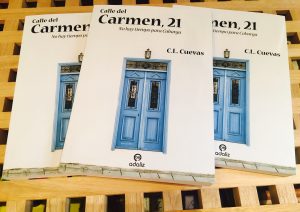 In crime novels, crimes are taken for granted. Without a crime nor the police, there isn’t a novel. That’s why today I recommend CALLE DEL CARMEN, 21 (‘Carmen Street, 21’), by Carmen Cuevas, an author discovered through our imprint SBeBooks, which was turned into a paper edition by the small but brave publishing house adaliz ediciones. They’ve just confirmed us that they’re already on its second printing, as the first one has been sold out. I encourage you to read it, especially to readers of this genre, because it will hook you and entertain you, and it has nothing to envy to many well-known authors of the genre.

You’ll find below the plotline and it would be great if it could be one of your summer reads, because you readers are the ones that help us make true the dreams of authors that, like Carmen, deserve a place in the publishing world. I also take the chance to congratulate the work done by adaliz ediciones, because it’s not easy to start a publishing house with good criteria and reprintings. So, lots of luck and encouragement from our end, and we’ll keep helping you build new voices:

There wasn’t a breeze of fresh air; it was going to be another bad day. Inspector Cabarga’s marriage is going through a rough time. He and his family need those holidays, but the unexpected discovery of a corpse in an old fishermen’s neighborhood is going to change everything in a way that he cannot imagine. No one missed that body until the smell of putrefaction started to be annoying and, nonetheless, the police found next to it a good amount of money. Too much money for anyone to just leave behind. Once again, Cabarga will find out that not many things are as they seem, and that what’s possible transcends our own imagination. A thrilling novel where reality shows its hardest and most human side, and where lives intertwine and exceed fiction. The best of the book is in each of its pages, and when you reach the last one, its characters will be forever in you.