Let’s confess a secret because despite I don’t like doing so, I cannot keep silent when the book I’m telling you about today, VIATGE AL CENTRE DEL MUSICAL, is so special to me for many reasons. The first one, and this is the secret, is that I would have loved being a musical actress. I’ve always enjoyed theater and I’m fascinated by musicals, so I’ve followed Dagoll Dagom’s career since I was a child. It’s an honor for me being the literary agent of Bozzo, though he might not know it, because he touches the two worlds I love most, books and musicals. I must say that I have never tried to work in the theater panorama, less in the musicals, because I sing terribly, and this is my frustrated dream. We all have some not accomplished dreams, this is mine. The second reason why it is so special is that since I first saw MAR I CEL, a musical I have seen as many times as it has been performed, I have always thought about how difficult it is to work as an actor and transmit feelings -and, on the top of that, singing! I realized it was a job, as the writer’s, that not everyone can do well but many dare to try. The third reason is that I’ve always enjoyed this musical with my family, something that we culturally share, like books, and I’m proud that we’ve been able to keep this tradition from parents to children. The first time my brother, my sister and I saw MAR I CEL was a Christmas Eve, and every Christmas Eve ever since we go to the theater together, with no exception. And these last two years even my son, who is almost twelve, has joined us because he can now appreciate something so beautiful, and yet so difficult as a good play. 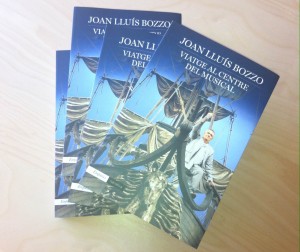 In this book Joan Lluís tells how his company opted for musicals with a wonderful arrangement of the MIKADO opera, then with MAR I CEL, which was a categorical success and then followed with the challenging FLOR DE NIT, written by Vázquez Montalbán, a tribute to Paral.lel Av in Barcelona. This is a book written with humor that will not disappoint any Dagoll Dagom or Bozzo fan since Joan Lluís not only knows everything about theater but also knows how to write in a friendly way to get the interest of the reader, exactly the same way he gets the attention of the audience in the theater. So, all those who have lived all these plays will love reading this chronicle, which is also is the portrait of a time. And for the curious ones, this is a book full of fun sparks that everyone will love, an amazing gift book for lovers of a profession. We are a lucky country that can enjoy extraordinary actors and actresses