THE DARKEST BOOK OF THE WEEK

This week Barcelona holds the BCN NEGRA (The Dark Week). There are conferences, round tables and events regarding the crime genre, which has always had a space in literature and in readers who have been supporters of it. The fine line between thriller, crime and mystery is really thin, but there are authors that have always been ‘noir’ and have become classics, like Ian Rankin, Philip Kerr, Harlan Coben or Connelly. However, there are also Spanish authors that have left a mark, like Andreu Martín, Carlos Zanon, Teresa Solana, Empar Fernández, Rosa Ribas and Sebastià Bennasar, who with his last novel El imperio de los leones brings us a novel about corruption based in a true story that has taken him several years of researching. 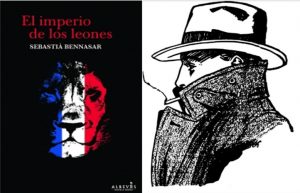 It’s a novel that gets you hooked, that captivates you and that brings out the best in this author, who has always been in his element with this genre and has published in very specialized publishing houses.

It tells the story of Jean Neige and his gang, who prepare the hit that has to establish them as one of the most dangerous criminal groups of France. But taking control of the Lyon mafia is a long path filled with blood that they’ve just started to wander and that will lead them to urbanize the Costa Brava, control the prostitution in half of Europe and the traffic of hash, among other things. The gang, always with one foot in illegal business and the other in the suspicious construction business, finds itself in a crossroads in 2006. Keeping the clan at the peak of power can be a hard task for Neige’s son, the heir.

It’s a tricky subject, of which we know very little about, and although it is fiction, it’s really interesting to find out what happened in the 70s with the mafias that came to our shore. Under Bennasar’s signature, this novel is synonym for a well written story, which will get you addicted to a real plotline that’s not going to leave you feeling indifferent. An ideal book to give as a present to all ‘noir’ lovers, and to those who want to know more about corruption and mafias, which are closer to home than what we think.