THE DANGEROUS PENDULUM OF HISTORY

I’m lucky enough that I get to work with something I love, to live surrounded by books, and to try and get the stories that reach me, these exciting, moving, deep stories, reach other people too. Quite often I think it is too big a responsibility, because not all styles are the same, not everyone thinks the same, not everyone makes us vibrate the same. But there is a common denominator to assess, in some way, what we believe must be published and, surely we are wrong many times, both for good and bad, but only consciously making mistakes let’s learn. I just hope that this time, with the work of Empar Fernandez, HOTEL LUTECIA, I’m not mistaken, because reading it we fell in love with the story and how it was told. Especially how it was told, because when reading there are times when I got goose bumps, moments when I could not help feeling the anguish of the characters that await in that hotel news of their families, and moments in the that I could not help thinking that I hope historical moments that only brought terror and violence do not repeat themselves. To avoid them, we must avoid falling into a gray past, where repression imposition and authoritarianism led to one of the worst epochs of our history. 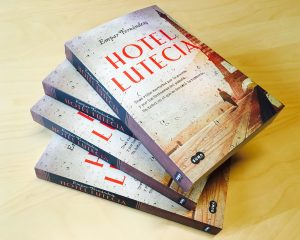 The Lutecia Hotel in Paris, which is currently closed for renovation, was a luxurious Art Deco hotel where some famous writers stayed, but it also had a darker era when it became the headquarter of the Nazi General State. Later on, it was turned into an center for survivors of concentration camps. It is in this hotel that Andreu Ribera, protagonist of the novel, goes when he leaves the Dachau camp of at the end of World War II, to try and have news of his wife, Rosa. There, at the Lutecia Hotel, the Red Cross welcomes the deportees and organizes the information that gets to the capital: endless lists of dead people, of missing people and, less likely, of survivors.

With this family saga marked by an impossible love story, magnificently set between France and Spain, and narrated with great sensitivity, Empar Fernández dares to try something new and different from the rest of her novels. This is a novel that tells the life of an exiled Catalan Republican, Andreu Ribera, who ends up in a Nazi concentration camp and who, at the end of World War II, can’t return to Catalonia and thus is forced to start a new life in French Provence. Composed of two narratives, it first tells the story of Andreu and then, the story of his son André who, in 1969, who travels to Poble Sec, an emblematic neighborhood of Barcelona, ​​in search of answers. Thanks to his grandfather Andres, both the reader and André will know the murky secrets of the Ribera family.

An intense novel, which recounts the cruelest reality of an era, which moves the reader but at the same time, wraps us in the atmosphere of Paris, Provence and Barcelona, ​​with a relaxing aroma of lavender and a deep, elegant writing style, which won´t leave anyone indifferent, that´s for sure. Great characters, an exceptional narrative and a horrendous historical background told in a such a perfect way, to make sure it never happens again.