THE BEST TRAVEL COMPANION: A BOOK

Second term is almost over. This week is the Bologna’s Children Book Fair and Catalan is the literature invited. We’re going to be there with all our titles written in Catalan, a language we want to take care of, and also with all the titles from other countries, obviously. However, I’m glad that a fair such as this, the most important one regarding children and YA, takes into account the Catalan language and helps us open our way into the market, because Catalan authors can’t always have a translation into Spanish and it’s very complicated to sell their books to other countries when it’s been written only in Catalan. Therefore, let’s take this opportunity because every language is enriching and ours has really great authors that help it make it even better. 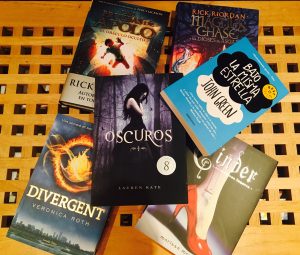 Bologna is a pretty fair, more relaxing than Frankfurt, but not less important because Children and YA’s literature keeps giving us many joys. The sales of books such as THE FAULT IN OUR STARS, by John Green; THE TRIALS OF APOLLO: THE HIDDEN ORACLE, MAGNUS CHASE AND THE GODS OF ASGARD, by Rick Riordan; the FALLEN series, by Lauren Kate; the saga DIVERGENT, by Veronica Roth or THE LUNAR CHRONICLES, by Marissa Meyer, have allowed us to take a breath in times of crisis and they continue to sell nowadays. So, a literature that had been ignored in the past, is now a driving force in the publishing world and, in our agency in particular, has always been one of its strongest points.

If books exist at home, children and teenagers are going to end up falling in love with it. In a house with no books, it’s difficult for new generations to get hooked on reading, but not impossible. However, I want to encourage parents not to leave this matter only in school’s hands, because we still have a lot of work to do in the family environment and, with everyone’s help, we can achieve that the ones that come after us keep enjoying books. For the ones who are already doing this, we know that it’s one of the biggest pleasures in life and that anyone who doesn’t read is missing on a lot of things. So, today, I’m going to leave you with the complete Bologna’s catalogue so you can enjoy our novelties that are about to come out shortly and that we try they get to other markets. I wish each of these titles triumphs in our country and encourages many kids and teenagers to live life with the best of companions: a good book. 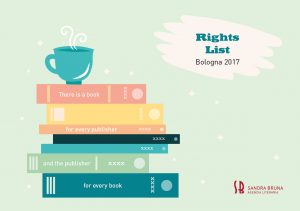