Last week, while reading El Pais, I couldn’t stop thinking about the latest Young Adult novel by Care Santos -the sequel of her book MENTIRA (‘Lies’), winner of the Edebé Prize and a huge bestseller. VERDAD (‘Truth’) deals with how Eric gets out of the juvenile center after four years interned, as he’s been absolved from the murder case of which he was unjustly accused at fourteen. In MENTIRA, you understand Eric and you want him to get out because he’s innocent, and in VERDAD you see how difficult it is to be accepted. Is that situation fair? 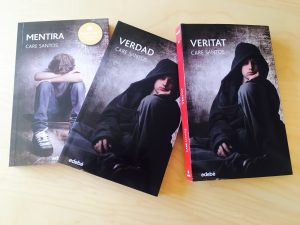 Reading the novel, I thought that it isn’t, nonetheless, as I read the news in El Pais about the rapist of La Paz’s neighbourhood (Madrid), I thought differently. This rapist, after raping more than 18 girls and killing two, got out of prison after 21 years behind bars, because psychologists said he was ‘sorry for it’. But he didn’t waste any time to rape and kill again. Maybe it’s an extreme case, but unfortunately it is not isolated. No one should be judged by the same pattern, but it’s difficult to ‘forgive’ someone that kills and rapes -I’m sorry, but that’s how I feel it, although everyone can change and improve for the better, thus everyone should have the right to a second chance. In my opinion, the elevator rapist didn’t deserve it, but Eric does, he’s a young and innocent kid and in the novel, you see how tough reality is when he tries to get back into society. It’s hard for him not to fall back again into delinquency when his surroundings want him to, as it is getting back in track with his studies, finding a job, getting away from his neighbourhood…Xenia helped him overcome some barriers that he thought were unbreakable, but… will love be strong enough to overcome the difficulties now?

Care Santos talks again about a prickly matter that has to be dealt with carefully, and she doesn’t generalize, even if it’s hard. Nonetheless, Eric deserves that chance, and he fights for it. An example to follow, without a doubt, and I wish this novel becomes a reason to reflect upon these kind of matters, both for young readers and grown-ups.