RESPECT IS THE ONLY WEAPON HELPFUL FOR A BETTER WORLD 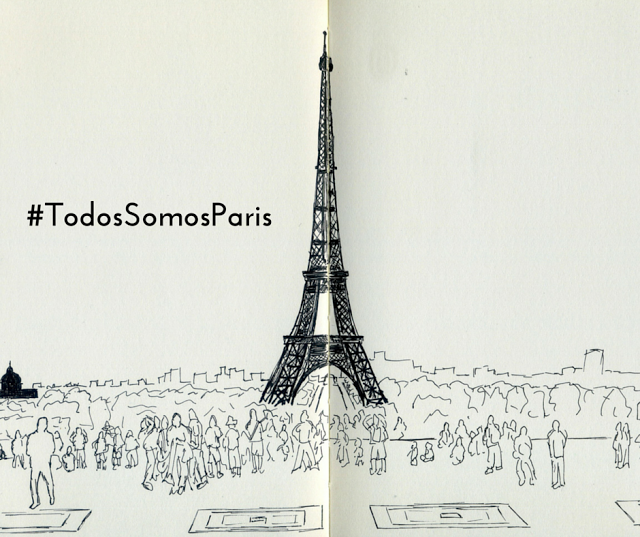 This week has begun sad, Paris bombings left a black weekend and saddened to most people who are against violence, we cannot tolerate that human rights and freedom are not respected. Upon hearing the news on Friday night, hatred came over me, I could not think clearly after a barbarism like that, and tried to keep a cool head, to convince me that this radical group is not a whole religion and does not reflect its followers, despite they want us believe it. It is a struggle of good against evil, and on each side there are people from all walks of life. It would be unfair to think that all Muslims are the same, we cannot put them all in the same bag. But the radicals, who have lost their heads and only think of hurting and transmitting this ideas to children and young people, without measure, without considering anything, I regret to say, I cannot help but wish them the worst, because they have broken families, have created terror in a city, and throughout the world.
We all know we cannot let that frighten us, but after an event like that on the weekend, it’s natural to feel fear, and solidarity with our French colleagues who have been more than touched, and it is still costing them catch the normal rhythm of their lives, because if it costs us, I cannot imagine how it will be costing them. Also, I deeply regret, too, have known that a young publisher, I did not know her personally but one of her companions, who told us about her at the fair in Frankfurt, has been one of the victims of the attack. A young girl with a bright career ahead, as many of the other victims of this terrible and unscrupulous act. Just thinking about it, I feel sick, because I think how unfair it is for all these people have been in the wrong place.
And it could have been any of us. I must stop thinking of it because feelings like anger and revenge awake in me, and only the question of why there are people who abducted by whatever and in whoever name bring out the worst of themselves. We cannot let ourselves be overcome by fear, because life goes on, and we hope that the world can and should be better, despite how you are passing injustices, we cannot control. Most people are good, want to live happily and peacefully, and it is important that we all know how to cultivate it daily. Everyday life is more important than we think to grow with values such as honesty, solidarity and kindness. We condemn acts such as Paris, and try that new generations learn that fanaticism and radicalism are useless, all extremes are bad, and know how to defend the beliefs with respect and humility is what makes us being human and distinguishes us from the beasts.
Today I recommend a book, published only in ebook, that predicted that this fanaticism of a few can destroy the world. In UN MUNDO REAL (A REAL WORLD) Francesc Juvanteny tells through a fast-paced thriller that unfortunately reality has overtaken fiction. In the novel, the most manipulative people in their specialties, who are able to rule armament industry and its strategic weapons, want to change the course of history. Their influences reach the Vatican City. St Peter’s Basilica, that has always been present, acts at its own convenience. It has its peculiar quid pro quo. The rise of Islamic terrorism doesn’t catch everybody by surprise despite the terror that spreads. Faith can join more judgements that it seems.
Perhaps readings like Francesc’s can help us understand, not to accept, what happens in this real world.
“We must unite not to be together, but to do something together,” Juan Donoso Cortés