There are days when you think it might have been better having stayed in bed and not got up. However, for some time now, these negative thoughts, that I have less often each time, disappear in an instant because I want to trust that anything can have a solution, as difficult as it may seem. And if there isn’t one, it’s not in our hands, most of the times, to be able to solve it. But human beings have a tendency to complicate our lives and make things even harder for us, I don’t know exactly why. When you stop for a moment to reflect on it, you think it’s because there are tons of things that are piling up and clogging your mind, leaving you in a state that doesn’t leave room for a possible solution to be found. 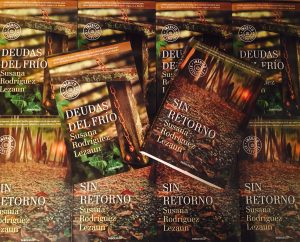 Novels help us see cases, sometimes extreme ones, of how characters react when faced with problems, and because it’s fiction, we accept it. Lately, I can’t stop recommending feel-good fiction books, as their reactions are the same as mine, because if I were to recommend the solutions of my favorite noir novels, there may be more deaths than lives in this jungle. That’s the case of Susana Rodríguez Lezaun’s novels. In her first novel, SIN RETORNO, Irene Ochoa has to make one of the most important decisions of her life; she can’t stand anymore her drunk husband, who treats her poorly, and she needs to escape. Must she cross the line of evil to do so? A fire in Irene’s house ends with her husband’s life, and David Vázquez’s inspector will take charge of the investigation. Has it been provoked? At the same time, in the Road to Santiago have appeared several bodies of pilgrims that Vázquez will have to solve, while he falls deeply in love with Irene. If you didn’t read this book, I can’t recommend it enough to any lover of the noir genre. It will leave you breathless, and because now DeBolsillo has published a new novel with a newer case of David Vázquez’s inspector, DEUDAS DEL FRÍO, it’s the perfect time for a “two for one”, perfect for a weekend of thrilling reads on the sofa. This time, Vázquez has a new case to solve, but they’re still being haunted by Irene’s past, so we’ll still know more about her story besides having a new murder; the managing director of the Hispano-French Bank appears murdered on the outskirts of Pamplona, where the novel is set.

Susana Rodríguez Lezaun is an author that we love and that has nothing to envy to other names that appeared at the same time as her, such as Dolores Redondo or Mikel Santiago, who have written great novels that I’ll keep recommending even though I’m not their agent. Susana sold with her first novel more than 8,000 copies, a huge debut, but with all first times, it was hard for the press to pay attention to her, even though she earned the praise of her readers. We believe she deserves way more and because of this, Penguin Random House is still betting for her with DEUDAS DEL FRÍO and a third book that, hopefully, will come out next year to complete a trilogy that, with the help of everyone, will manage to make big. We have a great author, with two stories at the moment that are fast-paced and leave you wanting more. She deserves to be read by any thriller and mystery lover, because it’s written by an amazing writer.