PLACES OUT OF THE MAP

This week the United States elections have been held, and I am sorry to say that, to me, it is disappointing that Donald Trump has been the winner. I do not understand that after a president like Barack Obama, who, like everyone, might have done some things wrong but who, generally, I believe has been a good president, now has Trump as replacement. I don’t live in the United States and maybe there are some things that I cannot assess, but from the outside, the candidate Hillary Clinton seemed more like someone who could follow Barack Obama’s steps, which have been firm and respectable. I am sure there will be a strong reason that people from abroad cannot see and I hope that none will have to regret this result. I wouldn’t like to think either that Hillary Clinton has been penalized for being a woman, as some have said. In the wake of this elections, the book that comes to my mind to recommend is the Premio Valencia Alfons el Magnànim de Narrativa 2016 winner José Vicente Pascual, who won the prize with a very special book, ISLA DE LOBOS (Island of Wolves), in which a woman governs an island and nothing happens. It is a novel hard to classify, but with the help of Victor del Árbol’s quote, an author whom I am passionate about and to whom I must thank for having given us this sentence, I believe that we all can get an idea of what José Vicente Pascual can offer to us with this awarded novel:

«With the imagination of García Márquez and the prose of Carpentier, José Vicente Pascual demonstrates that there are still shores to discover within literature». Víctor del Árbol, Premio Nadal 2016 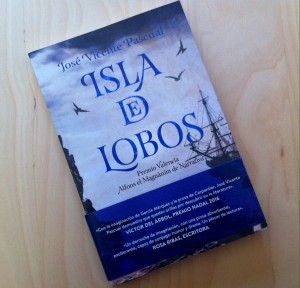 ISLA DE LOBOS (Island of Wolves) is compound of various characters: a geographer, a santero, a counter of waves and a woman who governs with an iron hand the destinations of the island. Apart from the mulatto Esmeralda and her daughter Albabella, who speaks with sea wolves and lives in a cave. Moreover, there is a volcano that guards the plans of those who dwell the mirage of time, the tiny bits of remaining lands and ripraps in the middle of the ocean, no more than a mustard seed that has fallen over the enormous tablecloth that is the sea. In this cloistered universe, over which there is an inescapable curse, the arrival of a naked man without a name, found lying on the sand of the beach and brought there by the swell, will become a thread that will be invoked by making him perform an almost impossible task. While he tries to accomplish the given ask, major forces than the ones of a mortal being, work silently in order to change the destiny of the Island of the Wolves. An edge that doesn’t appear on the maps and that is almost not even in the world.

In weeks like this, I would like to get lost somewhere that is not represented on a map, out of this world that I often don’t like how evolves. But I think that if we all did a tiny effort to try improving the small things, we would take great steps to acquire a happier world, less violent, where people wouldn’t be tense and where none would be a thread, even when it could seem so. I would like to congratulate José Vicente Pascual for this prize and I encourage you all to read this magical and adventurous novel that Ediciones Versátil has recently published. And, with the good work they always do with press, I am certain that many of you have already seen it on the newspapers, or heard of on the radio. A novel that is not easy to explain but it is easy to read.