PEOPLE WHO MAKE THEIR MARK

Meeting Nadia Ghulam changed my life a little, I confess. It’s been a few years since the first time I saw those powerful black eyes, though a bit untrusting, come in through the door of the agency to explain, with Agnès Rotger, a story that captivated me, and that later on won the Prudenci Bertana award, in the shape of a novel called EL SECRET DEL MEU TURBANT. Through Nadia’s real story, after her father’s sickness and the death of her brother, who she pretended to be in order to support her family, with all that entails in a country at war like Afghanistan, I met a brave, intelligent girl, with half of her face burnt by the explosion of a bomb in her own home, and that was able to keep going, with help from her mother, wo was always with her, and supporting her family. She arrives to Catalonia with an adoptive family, who she also adores, to keep on fighting from a country where we allow a lot of things that are forbidden in Afghanistan, and that way be able to get an education and to fight against the injustice that exists in her hometown.

Entering her life also made me think of a lot of things, and even though Nadia is one of the best people I know, she has a hard time letting anyone enter her world; but once we were able to feel that click it’s been an unforgettable experience, and having her near me always gives me positive energy. Nevertheless, Nadia, who’s very well adapted to our country, leaves the women of her family behind, and also half of her heart, because even though se adapts, she even learns Catalan, and loves her adoptive family so much; her birth family, especially her mother, her cousins and her aunts are still in Afghanistan, fighting to break with the conventions, trying to make things change. Like Nadia says, they are the brave ones and she tells us about it in her second novel, written with Javier Diéguez, a historian and writer; LA PRIMERA ESTRELLA DE LA NOCHE, published by Penguin Random House, in Catalan and Spanish, where they explain how Nadia went back to Afghanistan, how she tried to find her cousin Mersal, and how she wants to pay tribute to her deceased aunt. This novel becomes the discovery of the hidden story of the women in her family, as well as her roots, and herself as a woman, after having spent 10 years as a man in her land. 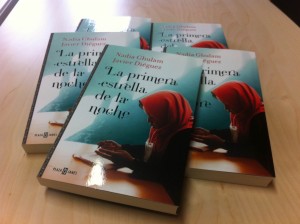 It’s a touching, intense and sincere tale, about the reality of women in societies so far from ours: how they get over adversity and they don’t stay impassive when facing a destiny that they seem to have to accept with no complaints. We’re in the XXI century and many of them know, and have to fight to make things different, even if it’s hard. Nadia is an example to them, but also to us, or at least to me. As I said, meeting Nadia made me think of a lot of things, and I saw that what we have here is a life of luxury, which we shouldn’t complain about, but be grateful; but also, it’s been an honor to have Nadia as a friend, because she’s special in every way, and one of the people with the clearest ideas that’s ever stood before me, and without wanting to, her honesty, sometimes very straight forward, has helped me see life from another perspective, and I can only thank her for that and tell her to keep being like this, to not let anything or anyone change her because when you grow up, you lose strength, maybe you think that a lot of things aren’t worth it, and it shouldn’t be that way, the spirit of fighting for what you want should stay alive forever. And that’s why I recommend this last novel, and the first one, if you haven’t already read it, because Nadia is a lesson of love, courage and life. And both novels will give us a GREAT story that makes its mark.