PAINTING YOUR FACE WITH COLOR HOPE

This book is, once again, special to me, because I’ve got a personal story with the author and this turns it into one of those that adds up to your life. To me, working with Alba hasn’t been work, but a huge pleasure —meeting her has been one of the most magical things that have happened to me in the past few months. When I received an e-mail signed with the name ‘Hope’ —which already raised my interest—, I thought that it was a person that had many things to say. And, precisely, that’s what happened. Even though we receive many e-mails from authors that want us to help them with their manuscripts, we have to reject them because we cannot take that much work: we wouldn’t be helpful to them, on the contrary. However, Hope’s mail caught my attention and I went to her blog to read what she wrote: I discovered a fresh voice, different and solid, that made me go to the city of Blanes, to her house, in order to meet her. That’s not what I usually do, but my instinct told me to ‘help’ her make her dream come true. However, Hope is the pen-name of Alba Saskia, a 25-year-old girl who had already written a novel about overcoming personal struggles, and had already earned an open door to the publishing world, as it had been shortlisted for the Planeta Award. They also saw, like me, that behind that novel there was a unique voice, different and very strong. 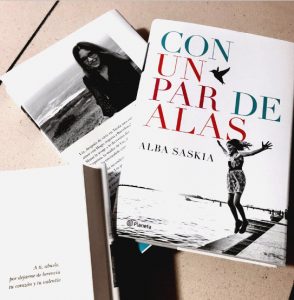 Alba suffers from a disease that only 80 people over the world have: The Brown Vialetto Van Laere Syndrome, a strange neurodegenerative sickness. But she smiles, she’s a strong and happy woman, with many illusions who led her to write CON UN PAR DE ALAS (already in bookstores). She started to write to be active, because she lost some of her hearing due to her disease, was admitted to the hospital and couldn’t even walk nor eat. Her blog Infinity Hope saved her, along with the unconditional support from her family, which never fails you and is always there, either for better or for worse. Therefore, Alba wrote a wonderful blog and, later on, she dared to write this novel, which was selected among the hundreds of originals that are sent to the Planeta Award and that the editor Lola Gulias couldn’t let go. Nonetheless, Alba let me help her in this journey and, although she had already entered this business, she trusted us and the job we do. After that meeting, unforgettable to me, at her place in Blanes along with her sister —who is a beautiful person and was pregnant at the moment. She even baked us some delicious biscuits to make us feel like home!—, we were all there, my father and even my son, who came with me (and he never does, but everything happens for a reason). This meeting was special for the three of us, and I hope that it also was it for Alba. Now it’s when the long-run race starts, and I hope we can get many readers from all over the world to read this story.

It isn’t a self-help story, but a story about overcoming your own struggles, for all of us who believe there’s always hope. This is Lía’s story, who after living in Tarifa a heart-wrenching love story with Hugo, comes back to Barcelona heartbroken. Her friend Manu welcomes her in and gives her thirty days to put herself back together. In the meantime, Perpetua, Lía’s mother, unaware of her daughter’s drama, keeps sending her letters to Tarifa whilst believing she’s still there. The unconditional help from Perpetua and Manu will be crucial so that Lía can start a new life, especially when María, and old friend with whom she shared years of study in a ballet school, appears and becomes the bridge to build a professional future doing what she loves: dancing. And Marcelo, a handsome water polo player, will be ready to accompany her to this new dance that is her life.

Sometimes, it seems like everything is going wrong, the sky becomes grey and there’s no way we can see the light of the sun once again, but with this novel, where friendship has a key role and, also, the passion to pursue a dream is really present, Alba manages to convey that if you want to, you can do it. That we must never lose hope. That if you do what you want and what you feel, you get where you want to. For this reason, this novel is for any reader, because it brims with HOPE, which is what Alba has tattooed on her skin, and she deftly portrays that in this novel, so well-written, and with such a strong voice, that it won’t leave you indifferent. She’s not ‘another’ writer, but the discovery of a new voice. Congratulations, Alba, for getting to this point, for having let me accompany you in this special adventure in which we’ve just started to spread our wings, because I hope that we can fly together far away, like you deserve, with the soundtrack of the song by Diego Torres, which always makes me think of you.

(In Spanish, the title of this blog post refers to the song by Diego Torres ‘Color Esperanza’)