NOTHING IS JUST BECAUSE

Philosophy is a subject, say, of those controversial, because when you are a teenager and you have to study it, whether you worship it or you hate it, there is no middle ground. I liked it, I admit it, and I had a great teacher; because it also has a lot to do with who teaches you and how. However, I had several companions who did not understand what it was for and, believed and believe, it is not necessary for anything in life. But when you mature, you realize that everything is useful in life and that nothing is just because. In Catalan television, TV3, they are broadcasting a series that has become a phenomenon, entitled MERLÍ, which has opened the mind to adolescents and many parents and has shown them that philosophy is applied every day in different areas of life. A cheeky but at the same time empathetic professor, who has a different way of teaching, is the new idol of the young audience. But more importantly, in each chapter he talks about a philosopher or group of philosophers and their theories. (Now Netflix has bought the world rights, so the series will fly and be seen in Spanish too, although I think the first season was already issued by La Sexta). 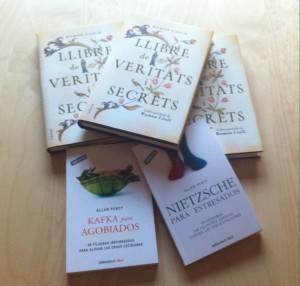 I love that this triumphs and I am proud to say that we have already used this formula in a book, with an author named Allan Percy, who has sold millions of copies in the world. It is true that, here in Spain, it has not been a resounding success, but it has been so in Brazil and in Greece. Maybe it would be time for MERLI’s fans to know that Allan Percy could be his idol in book format because he has published titles like NIETZSCHE PARA ESTRESADOS, KAFKA PARA AGOBIADOS, and PLATÓN PARA SOÑADORES, which will soon see the light. The formula is the same as that of the series, exposing the theories of the most famous philosophers to live our life better. Television has power, but we have to help books to have it and, from here, I recommend that you keep an eye on this author, because with books you also learn to live, to enjoy, and to be happy.

I have also had the same thing with Ramon Gasch’s novel, LLIBRE DE VERITATS I SECRETS, about Ramon Llull, writer, philosopher, theologian, teacher and missionary. An emblematic figure in Catalonia, and this year marks the seventh anniversary of his death. With this novel by Ramon Gasch you can get to know better a character that, although we have all studied him, no one knows much about him. Why did he not leave a record of his childhood and youth? The author, with great mastery, takes us to the period of life of this great character from Mallorca, with a story full of ignored truths and lost secrets. It is not easy to write about a great character and, I think Ramon has managed to make an entertaining and very special novel to give light to someone who is already well-known but of whom we didn’t know enough; a difficult task that the author resolves gracefully. It is highly recommended for all types of audiences interested in knowing more about a great character, and about history.