MOMENTS THAT SCAR A LIFE

Longing is an emotion, a feeling, which I’m sure we’ve all felt sometime. In my case it mixes with the nostalgia of the things I no longer have, and especially of past times, where my memories are of feeling good, of complete happiness. I miss the summers with my grandparents, who are no longer here, the meals with family when everyone showed up and the table was filled with food mixed with hope. The Friday dinners, and the weekends, with my siblings and my parents when we ate the pizza slices from a little shop at Roger de Flor Street, and it was our weekly feast, while we watched the show Un, Dos, Tres together.

All these nostalgic memories, and many more which I could talk about until you got bored, but if I continue, I might get emotional; they have been awoken after reading a novel like EL TIEMPO DE LA LUZ, by Silvia Tarragó, published by Umbriel in Spanish and by Columna in Catalán. 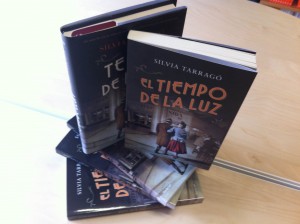 Silvia Tarragó, the author, is able to transport us to 1940, the inauguration of the first subterranean galleries in Europe, the luxurious Avenida de la Luz, in the Barcelona of the postwar. Julia is the main character and she will be witness to the evolution of the gallery and the different traders that make it up. Rosita, the daughter of the bakers, who lived her first love with the attendant at the cinema inside the galleries.  A strange lady who will open a typewriter store (remember the Olivettis?), a perfume seller who’s involved with men in the regime, and a railway worker who’s a poet. We’ll see how these characters’ stories grow and intertwine; building an underworld filled with passion and hatred, but that keeps changing, decade after decade, feeling the exciting beat of Barcelona of the postwar, until the end of the eighties. A coral novel, where Barcelona is the background curtain again, but in which human relationships and love, are the main core to explain a period of new beginnings, and the spirit of the traders after a tough war. Another novel for all those who like to taste their memories and share them, which you can read quickly and leaves you wanting more.