MEMORIES IN A PICTURE

Every time I go to my parents’ house I have the urge to grab the family albums from when we were kids, and I could spend hours going through them and remembering each moment. Nowadays we carry our phones everywhere and we take pictures that are never where they should be, as some of them are lost, some stay in the computer, classified by dates, and almost no one has the time to organize them, like we did before, and we don’t have these albums that are great memories of a life, and that we would all love to have in our shelves, just like my parents do. The power of new technologies doesn’t help us to move ahead in many things, but we’re the ones that should maintain and keep this most nostalgic part that we all have, and it’s hard, because days and months fly by. I’ve got the feeling that someone is stealing the hours of my day because I’ve got so many things left to do from the long lists that I do on the weekends and that I should follow through from Monday to Friday, that I laugh at myself when Saturday arrives once again and I start the list of everything that I’d love to do, while the thief of time looks at me square in the eye and starts running ahead of me. 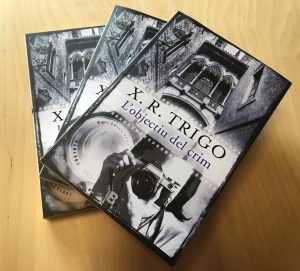 In literature, there are few novels that talk about photography, another art, and EL OBJETIVO DEL CRIMEN, the novel that Xulio Ricardo Trigo has just published with Ediciones B, both in Catalan and in Spanish, is one of those novels that hook you not only because they’re well written by an author with a great profession, but because Xulio has created a character, Erika, with such charisma, so interesting, that you’ll want to know more and more about this woman. At only twelve-years-old, right when the II World War ended, Erika was kidnapped along with her mother and two hundred more people by the Russian army, because they were working in the Contax camera factory and the soviets thought that only with technicians and German workers they’d manage to set in motion the manufacturing of a Contax replica, the Kiev camera. Many years later, in 1961, when the world shudders with the first news about the making of the Berlin Wall, Erika travels to Barcelona as a member of the German police to help with the investigation of the murder of two of her compatriots. These remind her about the methods of her kidnappers and the terrible moments she lived as a teen. With the help of inspector Casajoana, she’ll try to find out the reason why everything has begun again and what lies behind these murdered young woman, that bring her once again to her most hostile past, which she’d really want to forget.

An inspiring crime story based on the life of photographer Erika Ernemann and set in the world of classical photographic cameras. A literary work that hooks you because of the story and the beauty of the union of two wonderful worlds, such as literature and photography. Perfect for all readers of the mystery/historical genre and for those who aren’t, because with an astonishing voice, Xulio tells a story that is appealing however you look at it and that will hardly disappoint anyone. Congratulations for this novel that has managed a clear goal: to give a step forward.