KNOWING HOW TO FORGIVE AND ASK FOR FORGIVENESS

January the 6th was a special day, as it is the Epiphany, a day we really like to celebrate at home. This year it was even more special, because the Nadal Prize was awarded to Care Santos, author and friend of mine, with a novel that has made me think a lot about its main topics: forgiveness and guilt. When Care told me that the quote that had inspired the book was from Joan-Carles Mèlich –“You can only forgive the unforgivable”, I knew this novel would be brilliant, and I wasn’t wrong. 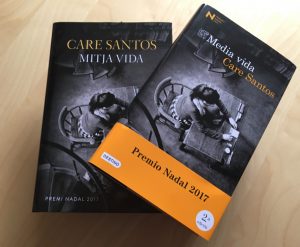 MEDIA VIDA is a novel that, through the life of five friends throughout thirty years, portrays a generation of women that had to build their destinies in the Spain of the dictatorship and the Transition. It’s a homage to these women, who lived in a moment in which the hypocrisy of those who wanted to keep up appearances at any cost confronted love and freedom. Five different lives, some successful, others not so much, but all of them scarred forever because of a terrible event that happened when they were teens. The main topic of this novel is how to deal with guilt and forgiveness, and many readers will mull over that once they finish it. Have you ever forgiven the unforgivable? Asking for forgiveness isn’t easy, but as I’ve gotten older, I think it’s not worth it not to forgive, and is way better to know how to apologise, so you can live at ease and happily with everyone. This novel is the perfect example that life is unpredictable and the best thing you can do is feeling good about yourself so that you can make others happy.

I started the year in a great way, but I also ended it recovering a very important friendship for me, which I’m not going to let go ever again. Maybe there are still some unfinished conversations, but I live with the illusion of having recovered something as valuable as one of my best friends from my youth. Reading is a great partner in this journey that we call life, and when it is a part of it, everything fits, like a magical puzzle. Without realising, you understand many things and you’re aware that nothing happens without a reason, just like another good friend has taught me.

Thank you, Care Santos, for such a wonderful novel, for this homage to friendship that won’t ever leave us. A high-end Nadal Prize that won’t disappoint anyone.