KIDS SHOULD ALWAYS BE HAPPY

This week, social media has become an ocean filled with fishes swimming. Little fishes looking for Gabriel, the missing boy from Almería. These last few days we’ve been keeping an eye on this story, which, unfortunately has not had the end all of us were wishing for. My heart breaks whenever I think how it must feel to lose a child, I cannot picture it in my mind. There is nothing worse that could possibly happen, and I really do admire his parents, that in this extreme situation have asked for peace, not hate. Kids are life, there is nothing bad in their essence, hence why they should never suffer, they do not deserve it. No one should ever suffer, neither the adults nor the kids. We should be able to live fearlessly, happily, joyfully in a better world. A world we are fully responsible of, and we should teach the new generations to create it always humbly, honestly and far away from violence. 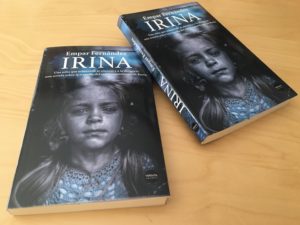 This is why, when reading Empar Fernández’s IRINA, I was able to also feel that “pain”. A pain some kids were exposed from 1937 to 1939 when they had to escape the Spanish Civil War. Many of which were fostered in cold Russia. They had to begin over new, adapt to a new world which was about to change, again, because of the explosion of World War II. They would have to suffer again. They would be exposed, once more, to pain, to suffering, to being alone. They had to overcome whatever they were exposed to, they had no other choice. Irina’s story traps you, hits you, breaks you, you just cannot ignore it. It is a piece of history from an eight years old girl’s perspective, through her eyes. She is aware she has to go on with her life, on her own, besides living in a cruel and unfair world. A world which also grants her a home, a place to stay, although it is not how she would like it to be. Irina is one of those characters which stays in the reader’s mind forever, as Gabriel’s smile, which we will never forget. I wish we could live in an ocean filled of nice little fishes swimming to find happiness, to reach peace. A clear sea in which hate did not exist and union, friendship and the will to build a better world, ruled. As in Irina’s times although some kids were never able to reach the deserved peaceful destiny. IRINA is such an amazing novel. Empar, as always, has been able to smartly build a story. A vibrating story. A story that dives into the deep end.