IT’S NOT ALL WHAT IT SEEMS

I was able to read this in the newspaper El País from a few days ago: “The German publishing world suffered a small revolution last year. The news that Mein Kampf (the wicked book that had been out of stock for 70 years) was about to be reedited caused a great debate. On one side where the ones who defended the project of introducing in a critical way the thesis Adolf Hitler started writing since he was captive in Munich in 1924. On the other hand, those who were afraid it would be used as inspiration by the new puppies of the extreme right wing. The controversy even reached the German Secret Services, which concluded that the interest in the extremist circles about the foundation of National Socialism had dropped in the last decades”.

News like this make us think that Hitler, Nazism and their surroundings will never lose interest for most people, because even though it seems like we know it all, there’s always little historical gaps from which we can get information and that will give us new perspectives, and most of all, new novels that at first can seem like the same, but are not. I think that EL INFORME AHNENERBE is a novel with a lot of potential and Santi Baró’s first adult fiction book, in which he’s learned to be historically accurate in the part of Himmler and an absolutely original and frenetic novel itself, that gives us that game of a novel inside a novel. Here’s the summary:

Ten years after the publishing of the Ahnenerbe report, by Marcos Clos, a kid with no identity who’s hidden with his parents for nine years in an apartment in Barcelona, disappears under strange circumstances, as strange as his own life. Nagore, the private teacher that’s in charge of his schooling, will be the one to find out the truth of his disappearance and, later on, of his parents. All the clues lead precisely to Marcos. With him as an ally, she will relive the scenes the author lived ten years before in a search that, without meaning it, will make them find the real treasure Hitler was looking for in the heart of the Montserrat Mountain. A perfectly built novel, with great doses of suspense and constant unexpected twists that relives historical moments in the I and IX centuries, and perfectly recreates the Ahnenerbe society, an organization that’s built into the SS, whose leaders wanted to create a new elite body of warrior monks, a true Black Order, based on old German Paganism and the dogmas of faith in Nazism, which wanted to end Christianism. 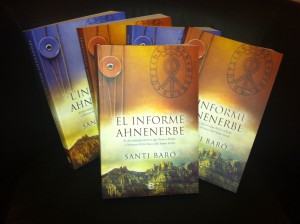 A revealing story that makes two thousand years of Christianity blow up in the air. An exciting mystery that leaves the reader without breath. The typical historical action novel that both men and women like, and that also adds a mystery that keeps us on the edge until the last pages, which is the disappearance of a 10 year old who doesn’t have a conventional life. But why? A perfect page turner for this Sant Jordi, to be read by those who are avid readers and those who aren’t so much, because this novel can hook even those who don’t think of reading as their priority. Don’t miss it!