IS THE INEXPLICABLE TRUE?

I have assumed that there are things in life that have no explanation and that you simple have to know how to live with them. There are inexplicable things because I would never act in a particular manner and others would, and that create a kind of not-knowing-situation going on in us. There are inexplicable things because they are strange phenomena, or things that happen by chance, but I don’t believe in chance. The later have happened to me, though, and I think it is destiny trying to put you in front of what you need. However, I haven’t yet experienced any strange phenomena, I have only read about it because it’s something I like, and I have watched tv series and devoured several books about it. 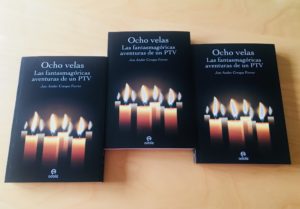 This is not the kind of genre I mostly read, but every now and then you find a novel that manages to hook you in, and this is what happened with Jon Ander Crespo’s, OCHO VELAS, and I totally fell in love with the main character, a ghost buster. It’s a novel set in Pamplona, a city that I love, where an alarming manuscript alerting about the presence of ghosts in the city suddenly appears. This is how an the thrilling and sometimes humorous adventure begins, which is not easy to manage and yet it works perfectly fine. There are strange paranormal happenings around the city. A story some want to keep quite and in low profile until a series of deaths start to happen under very strange circumstances, which won’t be solved until many years later, when a detective and a special affairs division inspector will be forced to face inexplicable cases and look back into the past in order to understand what is, apparently, impossible to explain.

This is the debut of a talented author who publishes in a small, yet big, publishing house because he likes risks, because he just goes for it, because the editors looks into editing with a present-day idea. Even though the publishing world is full of strange phenomena, many of us know that work, constancy and doing things to the best of our abilities have a reward, and Adaliz knows how to get this done. Congratulations on the good work to the editors and the author, who clearly deserves this opportunity.