FRIENDSHIP AND LOYALTY ARE POSSIBLE SOMETIMES

It’s already been two years since I first started writing this blog and it’s only natural to sometimes repeat those things I strongly believe in, so you must have already read that he who has a friend has a treasure, because I really believe so, although it’s complicated to find out who really is a friend and who’s not.  We feel betrayed and frustrated because people we think are essential in our life end up walking by it just for a moment or end up being something other than what we thought. The worst part is not knowing why or not being able to find out. But it’s good to face relationships just as they come in your life and to know that, other than people, you can also count on animals. Many of us have pets, mainly cats and dogs, which we love like members of our family. I like dogs way more than cats. For example, and even though I’ve never had one, I love their loyalty, and I see my friends with their dogs, that special bond they have, and they often tell me themselves, that their dog is better than some people, and it keeps them better company. And that’s how Alejandro Palomas portrays it in his last novel, UN PERRO, already in bookstores around Spain, to steal our heart once again.

After UNA MADRE, a novel that’s already on its 9th edition and hasn’t stopped receiving compliments, and after UN HIJO, which won the Joaquim Ruyra prize in 2014 and sweats magic, we have UN PERRO that shows that fascinating relationship that’s only possible between a man and his dog, that only some may understand and others may respect, but the existence of this relationship is real, and Alejandro, as well as Cesc Gay in TRUMAN, are witnesses. 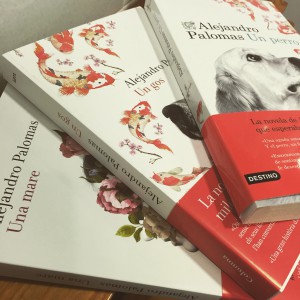 Like all of the novels by Palomas, this one won’t leave you indifferent, not those who like dogs nor those who don’t, because it’s a novel that talks about life and how complicated it is to keep relationships and to speak with the heart. Palomas excels one more time and uncovers himself, flustering us with the relationships in his family. With R and our Amalia, and I say “our” because I’m sure that many readers already feel like they know her and even love her, without forgetting the unforgettable look in Fer and his two sisters’ faces.

It’s another unique moment in life, as if there was nothing else happening, where the characters, blow up once again, for better or worse. Alejandro knows how to hit where it hurts, and how to bring us to a great smile just with the description of a precise moment, that will once again trigger revelations and the truths. Precisely how it happens in the best families and in the best relationships. Saying things, the truth, in the best way possible without hurting, or without offending is so difficult it’s an art, but anything can be conquered with LOVE, even our greatest fears. With this novel that hits us straight in the heart we are able to suffer, we laugh and in the end we acknowledge how hard it is to write about feelings, and how easy Alejandro makes it seem, leaving us with a novel that I’m sure will leave its paw print.