Feelings are a hot topic in the world we are living in, since we often hesitate whether to publicly show them or not. Since I was a kid I’ve always enjoyed showing how I feel: hugging, kissing, caring for people. My siblings used to tell me I was annoying as whenever I had a chance I gave them a hug or a kiss. As I grew older it was harder for me to express those feelings, curious as it may be. I am trying to overcome that now I’m aware of it. There have been points in my life in which I’ve not been so at all, therefore I am tried to control my feelings so much up to the point to not even feel. Once I reached that point I knew it was about time to change. I think being able to say ‘I love you’, give a kiss, or a hug, is something we should never avoid. After a period of time in which our feelings have been deeply hidden, it is not easy to go back to normal but we have to try, to really try. Because when you stop feeling, you stop living. 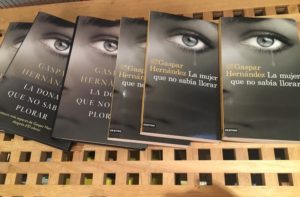 Gaspar Hernández is the feelings erudite, and his newest novel is devoted specially to them. LA MUJER QUE NO SABÍA LLORAR published by Destino and Columna, on sale today, is the story of a woman who blocked her feeling to the point she was not even able to cry, not a chance. Not in funerals, nor in drama movies. Not even trying to provoke sadness. A colossal blocking. Her being a sexologist – one of the first sex experts during a time sex was a massive taboo-, she managed her mental blocking by settling down herself. Sex was a way of scaping, a way of moving forward. An insatiable woman. But sex is a way of vital energy. It’s got an spiritual dimension. Sex well performed can be a way to the great awakening. AND NOT ONLY SEX, but anything we consciously do, anything will open up our eyes and our hearts.

The narrator of the “La mujer que no sabía llorar”, author’s alter ego, met the famous sexologist, Daniela Costa-Pau, when he was only seventeen while he was working in a small journal as a scholarship. He edited her sex articles. Because of that relationship he got to know her story, a fascinating story on sexuality and sexual freedom, of highly sensitivity and about repressed feelings, Ayahuasca and people’s development and evolution. As he did with his pervious titles, EL SILENCIO, an amazing bestseller with over 60.000 examples sold, and LA TERAPEUTA, Gaspar explains how feelings affect our daily life, but instead of writing an essay on it, he discovers the plot through a marvelously written story making us deeply fall in love, as all his work does. A great novel, a great topic to wonder and think, a love story which completely traps you from beginning to end, suitable for all audiences who are looking for a different novel. If you are looking for that you must check this one out.