Who hasn’t felt fear at some point? Fear is an emotion, and we can feel it due to many things. I’ve always thought that fear is something negative, but there are experts that say that it isn’t, that fear is a basic and primary emotion, because it is found in every culture. However, it’s an unpleasant one, because it makes us feel bad, although there are many people who enjoy being scared, may it be watching a movie, going up on the highest attractions or taking up challenges that scare you to death before doing them.

I have to be honest, and the new novel by Malenka Ramos, who’s switched genres completely, puts you on edge. I’ve been scared while reading it and it has surprised me in such a good way that I believe people addicted to thriller novels can’t miss out on this new novel that has been published with the title LO QUE HABITA DENTRO, in Plan B. I’ve loved the punching line used to sell the book: EITHER YOU DEAL WITH THE MONSTER, OR THE MONSTER DEALS WITH YOU. 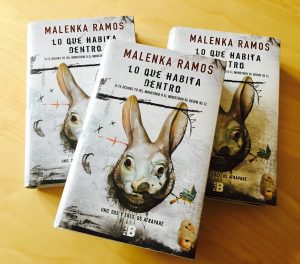 A CHILDREN’S GAME THEY’LL PAY FOR THEIR ENTIRE LIVES

At Witches’ night, a group of kids enter the old house Camelle, an abandoned place full of terrible legends. But the house holds a dark secret and a well from which it hangs a light bulb that shouldn’t have been working.

One, two and three, I’ll catch you…

Nights become a constant fight in order to survive the visions, the scratches in the wardrobe, the sounds under the bed. Two of the kids go missing and something is chasing them.

I’ve got stones, Enma… Many stones…

All of these kids are now grown-ups, but they’ve never got rid of their visions and the terrible events they lived when they were so young.

The messages and the visions of the ghostly kids chase them more strongly than ever.

He’s back… Bunny, the cruel…

I believe there aren’t positive nor negative emotions (this is what practical guides usually say). It’s always good to feel any kind of emotion, because they are useful, and we should feel our emotions with freedom, instead of repressing them or trying to control them. The problem with emotions starts when they limit us to do what we want to do, and I assure you that fear paralyzes us. Malenka has done it so well with this novel, that as much as you shake with fear while reading it, you’ll want to keep on doing it, hooked to its pages and to a pillow that you can hug at night. Don’t let fear paralyze you, ever, nor while reading, nor while living. So, for the curious ones, and for any lover addicted to that satisfying fear, don’t miss out on one of the newest thriller authors, who is here to stay.