FASHION, LOVE, GLAMOUR AND BARCELONA FOR THIS SANT JORDI

These days there is an advertisement on TV that when I hear it, I love it. It is for the 75th anniversary of El Corte Ingles. A great nostalgic music that makes me think of when I was little, my grandmother who used to sew and made us great costumes, and wool sweaters, which itched me everywhere, but now I remember it fondly. I have never liked big stores, I have always defended the small neighborhood shop in front of the big monsters, but I like the ad and I confess that several times to go shopping in department stores has bailed me. However, small shops which survive, who defend their business every day, are the ones that I admire. And some of them started from nothing and now are big stores, big-name and centenarians. 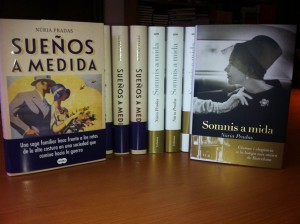 This is the case of Santa Eulalia store in Barcelona, ​​which Núria Pradas has fictionalized the fantastic story of a family that despite the difficulties, has managed to reinvent itself and endure. The novel SUEÑOS A MEDIDA (Suma de Letras), and in Catalan, SOMNIS A MIDA (Columna) is a fascinating story of a family business that faces the challenges of haute couture, in a society that is heading towards a war. A shop where everything is possible. An entrepreneurial dream, two women marked by the same love, the friendship and the first fashion shows in the city. Glamour, love, elegance and a dream. Thus we witness the birth of the first collection of Santa Eulalia, his first fashion parade, its international projection and its transfer to Paseo de Gracia. With Laia, the daughter of one of the seamstresses of the fashion house, we will visit Barcelona in the 20s and the 30s and we meet characters who take us to decisive moments in the history of the city and the world fashion.

Barcelona’s great novel of this Sant Jordi for any generation.