A DEBUT THAT PASSED WITH FLYING COLORS

After I saw Juan Antonio Bayona‘s movie, THE IMPOSSIBLE, I’ve always asked myself what live in that kind of countries, where a climate catastrophe can happen at anytime, can be like, like the filmmaker describes it in the movie which, by the way, I liked as much as the THE ORPHANAGE. In fact, I’m already wondering about when I will be able to go and see his last film, which will be released in October, because he is a director who has never let me down. Speaking of catastrophes, every time I see the images of the one we lived some years ago in Biescas in Spain, because in August it is the anniversary of the bloody flooding, I get goosebumps. I think that surviving something like this has to be brutal and has to mark your life forever. Unfortunately, there are always news of this kind, recently the earthquake in Italy this August, for example, and it sends shivers up my spine to think that nothing depends on you and that it is all something external, uncontrollable. 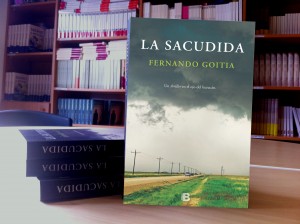 And, while I was reading Fernando Goitia‘s novel, LA SACUDIDA, in which a volcano collapses over three thousand people while the hurricane Mitch devastates Central America, I could not help thinking that we are lucky to live where we live and I do hope we know how to take care of the planet and that experts can try and keep struggling to control what is now uncontrollable. However, I loved Goitia‘s novel from the first moment, despite of the thought of disasters for a few minutes, because the protagonist, a Basque journalist arrives to the scene of the tragedy to make a report and dig up an individual without identity, dying between debris, and unknowingly saves the life of a man with whom he is doomed to face and has two things in common: both have their hands stained with blood and none of them is who they claim to be. Then begins a long journey, in a shattered land, where the two protagonists must face the truth. It is a novel about guilt and remorse, within a context of violence of nature, which is uncontrollable. What could be avoided is the violence caused by men, and this is why this thriller is so special because the two characters are murderers with divergent ideas, and they both live their lives with a dark past behind them… The reader will discover with them an interesting plot that ends with a big question: do we have the right to have a second chance?

This novel moves at a fast pace but that will also have the reader reflect on many aspects of very well constructed characters and won’t let you stop reading to learn more about who will be the victim and who is the executioner. And that’s all I can say, if not, I would reveal too much, and you readers must find out what happens and why. But I can guarantee that Fernando Goitia‘s debut won’t disappoint you. Also, it is an ideal opportunity to discover a new author that has been released and has passed with flying colors.