This week I am writing from New York. What a breathtaking city, it’s beauty hardly matched. Every time I come back I fall in love with everything and discover so many new things that I cannot stop thinking about how fortunate I am for being able to travel here. 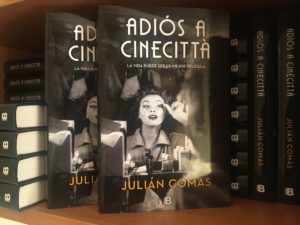 I love that, this week and from this beautiful place, I am recommending a novel about cinema and that will be published on the 17th of May. We all think that America is one of the pillars of cinema, with Hollywood and its myths. That’s why recommending ADIÓS A CINECITTÀ from America feels like a very special opportunity, because it welcomes us in a time when Rome, the European city, not American, had its own factory of dreams. More than three thousand films were filmed there; more than fifty of them won Oscars. Julian Comas, Jordi Solé’s pseudonym, writes a tribute to cinema and those studios, which are a marker of the Italian golden years of cinema.

Through Gino, an old man who meets Jerry, a reporter who wishes to write a piece about the studios, we will travel to the Rome of 1957 and will meet the soul of cinema during the shooting of A Farwell to Arms, starring Rock Judson and Jennifer Jones, with all the ups and downs of a business that seems to be always idyllic, but in which nothing is always truly perfect.

At the same time we will share a girl’s aspirations to get a starring role, like many others in her place, but she ends up becoming a costume design assistant. She is pure beauty, but she is shadowed behind the cameras. Gino will be the only one to notice her true beauty. As Guino starts to fall for her, he will face his toughest decision yet: does he want love, or does he want a career in the film business?

CINECITTÀ can still be visited in Rome, although there are constant threats of shutting it down. With this novel we try to pay tribute to it and to pass on to our reader the essence of all the dreams that were locked in that place, and those that managed to fly and that are, today, part of film history.