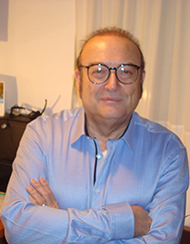 Gregorio Morales (1952-2015)  played first line in the “Movida madrileña” (the Madrid Movement), collaborating from No. 1 with the magazine La luna de Madrid, and then organizing the creators’ gatherings at the Círculo de Bellas Artes. The spirit of those times was realized in works like La cuarta locura (1989), El pecado del adivino (1992), La individuación (2003) and Nómadas del tiempo (2005) — the book where he first abandonded fiction to fulfill a need to approach life from other perspectives, sometimes rule-breaking and newfangled, and always heterodox. During this long “descent into hell” he published other genres, such as non-fiction — he was the author of a large erotic anthology of world literature published by Espasa) — or poetry (Canto cuántico, 2003; Sagradas palabras obscenas, 2009). Nevertheless, it was in La Evavolución — where he rencountered his novelist’s vocation — that he finally distilled the experience of this long reflection and research period — with its inextricable labyrinths, its bottomless abysses and its diaphanous perspectives. Not for nothing literature was for him “the most advanced instrument of knowledge”, and he applied the same principle to the weekly columns he writed for the newspaper Ideal and his blog El real invisible.