1977, Sant Celoni. He graduated in Publicity and PR in the Universidad Autónoma of Barcelona. When he finished his studies, he moved to Scotland, where he met the woman who would be his wife, Lindsay H. Wood. Back in Spain, he made a place for himself in the communication world and started working in Ogilvy One, focusing in publicity writing. He grew up as a professional in several agencies, working for high street brands and was promoted until he became Creative Director. Now, he works as a freelance and provides his services to big companies and PYMES.

He’s written poetry, short stories, young adult novels and children’s books, although they’ve not been published. In 2011 he collaborated in the book Les estrelles, by Editorial Meteora, and in 2012 he was a two-times winner of the Catarsi magazine contest, specialized in science fiction. He lives by the mountain el Montseny and works as a freelance, focusing on marketing and language teaching. He’s the father of two kids, Ewan and William, with whom he shares his insatiable hunger of devouring stories. CONÓNDROMO is his first published novel. 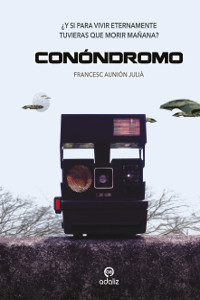