A MAGICAL PLACE WHERE WE CAN MEET AGAIN 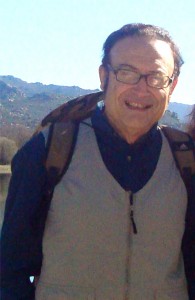 Last week was a week to forget. There are times when you would throw in the towel and say “enough is enough!”, but I cannot do that, I depend on my job and furthermore, despite everything, I love my job. I must confess that neither San Juan’s break, where thanks to my friends and family I had a few hours of rest and even laughter, made the week better. When the 24th we received an email where we were reported the death of Gregorio Morales, I could not believe it. It was the straw that broke the camel.

Gregorio was at the agency for about three years and from the first day he walked in the door, he stole our hearts, both Joan’s and mine. We saw in him a great person, and when we read what he brought us, we saw a great writer. What more could anyone want? From the distance, he lived between Granada and Madrid and we are in Barcelona, we always felt close. Gregorio followed this blog and encouraged me with his comments; he sent nice and human emails, even though we were having a hard time to find a publisher for his novel. He was sure we would get it, and I tried it all, but no one could understand his novel the way Joan and me did, until Max Lacruz read it, thanks to Gregorio himself, not me. Then he passed the baton to me, and we got it. It is an honor that an editor as Max, who defends a small and very prestigious publishing house, saw the novel the way we all did. Funambulista is publishing the novel. I gave Gregorio the big news, it was a joy that we could shared with him, and we made an appointment to sign the contract face to face and to hug and say “we did it, my friend.”

But fate kept a trick and Gregorio could not sign the contract. Life is unfair, I cannot think otherwise, and with the help of Max, we’ll try to publish the novel in honor of his memory. He cannot touch it, but he will look at it from above, because I’m sure he will be one of the biggest stars in the sky, and he will keep a small space to meet again at that place where there is only goodness, and there we will meet again and will hug and have that moment that life has denied us. Rest in peace, my dear friend.

“A true friend knows your weaknesses but shows you your strengths; feels your fears but fortifies your faith; sees your anxieties but frees your spirit; recognizes your disabilities but emphasizes your possibilities” William Arthur Ward