Many of you may know that my shelter is Sant Pol de Mar, a town where I’ve spent my summers ever since I was a teenager, and that I feel is a very important part of my life, because that’s where I’ve made the best friends, where I’ve spent the best summers, and now my son is enjoying the same way I did, because we’re no longer limited to summers, now we go every weekend to escape from the city. I love the sea, the sunsets and the town life, calm, relaxed, where we already know most of the residents and they’re part of our lives, in some way. And this past weekend, we’ve had to live a tragedy. On Friday they killed a 35 year old boy in the middle of the street, like in the Bronx, in a violent and treacherous way. I still can’t understand it, I can’t accept people that evil exist, capable of killing in the middle of the street and with he didn’t even hesitate although he wasn’t well, he was drunk and drugged, because something like this, I think, can’t be forgiven. I didn’t know Bruno too much, that was his name, but he was as kind person, like his brothers, who I know a bit better, because they have a restaurant where we normally go a couple of times during the summer, but I can’t stop thinking about him, about the few times we exchanged some words, about his family, his neighbors and friends, who were all devastated. Sadness was in the air, you could almost touch it. It’s unfair, and once again real life beats fiction, since we couldn’t expect something like this from a town like Sant Pol, where everything is calm and in peace. I still can’t get that Friday out of my mind, and I feel sad, because it’s an unfair situation, that seems unreal, I wish it had been the plot to one of the novels I can recommend every week in my blog, and not something that happened and left us all with a broken heart, sad eyes, and a bitter feeling that won’t be easily forgotten, and even less by the people of Sant Pol, almost all of them Bruno’s friends or family, to whom I can only say that I’m sorry and to stay strong, even though it’s not easy. 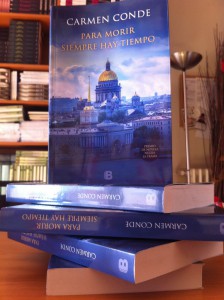 This week we also have to talk about black Barcelona, and with a novel that I cherish very much, because it’s been hard to bring it to life, not because it wasn’t good enough, you can check, but because sometimes it’s not easy to fit all the pieces together exactly when you want it and how you want it. Nonetheless, the determination to trust, both author and us, and to sail in the same direction, has leaded us to winning the LA TRAMA prize for Crime Novel, published by Ediciones B, with the novel, that was called EL ESPÍA RUSO before they published it, when we read it at home and we loved it, and now that it’s published it has a more commercial name, PARA MORIR SIEMPRE HAY TIEMPO, which we love, but for nostalgic reasons, which may only be understood by us at the house and the author, to me it will always be EL ESPÍA RUSO, which tells us the story of a frustrated writer, obsessive and hooked to her medication, Julia Irazu, who’s a real expert in complicating her own life, but this time the problems come from the outside. By accident, she sees herself stuck in an art trafficking network, between millionaire interests and ruthless criminals, and she meets Viktor Sokolov, a so-called Russian spy next to whom she’ll live a dangerous adventure through Bilbao, Palermo and St Petersburg. But, that will be the moment when Julia discovers a basic principle that she didn’t know about. It turns out that there’s always time to die. Owner of an addictive writing and a smooth sense of humor, Carmen Conde strongly irrupts into the literary scene of the moment, ready to steal many hours of the reader’s sleep, this spy novel is like none other and I’m convinced that you’ll be stuck on the sofa because you won’t be able to stop reading even if you want to. I congratulate Carmen Conde for this award, for getting her book published and for her patience and trust in our job. I hope that those who like strong, crime novels with a plot that won’t let them stop even to take a breath, will buy it and will give this new voice an opportunity, she’s here to stay.