PUT A ROBIN HOOD IN YOUR LIFE

Even if the character Robin Hood is a shameless rascal, most people always like him. Someone who “steals” from the rich to give to the poor, it’s not exactly right, because stealing is not good, or it shouldn’t be even if you live in Spain, and even if you steal from those who have the most things. Nevertheless, we always come to a truce because when it’s those who have the most who extort those who don’t, and mistreat without control and just for the pleasure of having more, maybe we don’t think it’s that bad. This makes me think that maybe society nowadays, with all the outrage related to envelopes and so on, maybe a good Robin Hood for the people wouldn’t be so bad, because it’s time for someone to say: stop extorting the little ones, and take out of the management of power all those people who have taken advantage of  it. The way I see it, nowadays, nobody would be left unpunished, even if we still don’t have a government or a clear candidate, because the people are tired of broken promises and people who lose the perspective of where they are and why they’re there, as soon as they get the job; and power turns into something completely selfish. I know it must not be easy, but it wouldn’t be easy to be Robin Hood either, because his philosophy was to steal and give it to those who needed it, something that most of us would do, so I would say; put a Robin Hood in your life, see if things work better.

Víctor Amela is the fair winner of the Premi Ramon Llull 2016, LA FILLA DEL CAPITÀ GROC, published by Editorial Planeta, and that will also be published in Spanish in a few days. It’s a “romantic” novel, set in the nineteenth century near the magical mountains of Puertos de Morella, which recreates the adventures of Tomás Penarrocha, a real character known as the Groc of Forcall who fought against the liberals in the area of Maestrazgo during the two Carlist Wars. He was Robin Hood of the forest, or of the mountains, in this case. 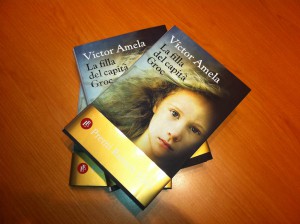 The author discovered the adventures of the Groc during the long summers of the childhood he spent in Forcall, town in which his grandfather was born, and thought it was clear that there was a story to tell; a sweet and wistful novel, but harsh and tragic at the same time, where a local character turns into a universal one. And we can’t forget the character of Manuela Penarrocha, his daughter, with her grey eyes with which you fall in love from the first page, and whose relationship with her father will be one of the most beautiful parts of this story; gentle and warm unlike the bloody battles of the time, the Carlists. There’s not much said about these battles and this is yet again a selling point for this novel that shows us a part of history, that’s not very known, in a suggesting way that turns this into an atypical historical novel because it hooks you in the same way a thriller does.  So readers of any genre will be interested in getting to know who EL CAPITÀ GROC is, where Forcall is, and to take a walk through the area; another element for this book that is bound to be successful, because of the quality and the “humanity” of the story.