THE DESIRE TO HURT

I’ve said many times in this blog that truth is stranger than fiction, and it’s true, because unfortunately, last Friday I heard the news that a father had taken his little kid in his arms -I’m not sure, but I believe he was just one year old- and he threw himself with the kid through the window, after telling his wife: I’ll hit you where it hurts the most. I couldn’t believe it. I think the world is going crazier each day, and if we don’t take a moment to stop a little bit in our lives, we might end up just like that. It’s impossible that someone who does something like this is in their right mind. To me, they’re sick, even though I can’t help but think that such an act has no place for forgiveness, and it leaves me speechless that there are people capable of doing something like this to hurt another person. So after this terrible event, that happened here in Spain last week, the gruesome plot for the following novel falls short in comparison, although I haven’t been able to stop reading it from the first to the last page. 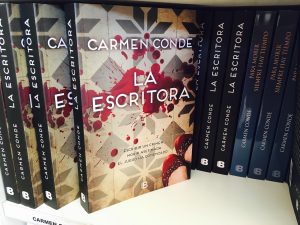 LA ESCRITORA, by Carmen Conde, tells how 27-year-old Lucrecia Vázquez, raised in foster homes and who suffers a disorder called Gilles de la Tourette, is offered to be a ghost writer. Behind those awkward tics, Lucrecia hides a brilliant intelligence and a talented but difficult character. The proposition of becoming a ghost writer (a trendy topic) by Danna Green, a bestselling writer going through a creative crisis, appeals to her, but she can’t imagine how this ‘job’ is going to complicate her life.

Publishers request her a blood curdling plot, scabrous, a thriller that hooks the reader in, a bestselling novel that has everything in it, but what Lucrecia can’t imagine is that her first meeting with the writer is going to be one of the most horrifying scenes she could never have written: Green has been murdered in a terrifying, horrible way. And she’s the one who finds her body. Turned suddenly into a suspect, Lucrecia must prove that the killer has nothing to do with her…Or perhaps it does?

This is the second novel by Carmen Conde, who is receiving amazing critics and reviews and that after her first novel, PARA MORIR SIEMPRE HAY TIEMPO, winner of the La Trama Noir Novel Award, is reaffirmed as one of the writers who is going to give us a lot to talk about. I’m sure that she already has tons of addicted fans, those who can’t stop reading novels that are great for not letting you sleep. Don’t miss the chance to give it as a present this Valentine’s Day because, even though it’s not a romantic book, it’s a very precious gift for any thriller lover out there that spends their weekend reading wonderful books on the sofa, while biting their nails at each page.