Being a literary agent is a glamorous job, or that’s what it looks like, it looks good on the business card, at presentations, dinners, literary prizes and trips. People want to know what we do, and they find it fun and thrilling, which it is, but it’s mostly shady. The truth is that I’m an agent almost by chance; I started working at a literary agency when I was very young and from the very bottom, as a courier, but I started working my way up and learning from scratch… The best degree, I can assure you, is EXPERIENCE. But, although “glamorous”, it’s also hard, difficult and stressful.

Being a mediator, being in the middle, is always complicated; and more so when you have to fight for the interests of another person, who has given you all their trust, because if he hadn’t it would never work out. You have to be careful and charming at the same time, and you really have to control the game so nobody ends up offended, mad, or thinking you’re trying to rip them off. The truth is that people do things in different ways, but I try to always be the same. Being clear, honest and trying to do whatever is best for my client but always being good, isn’t always easy. Nevertheless, I must confess that this job hooks you, like Coke, the more you drink the more you want, because our day to day, even if filled with stress and difficulties, is almost addictive, and it’s difficult, not to say impossible, to stop thinking about the books, the stories and the goals.

Sometimes I’m not even aware of the huge authors I represent, who are on the New York Times bestselling books list, and in newspapers around the world, and it’s an honor to have built a path for these huge authors in the markets where I’m able to manage their rights. Authors like Amy Tan, Yann Martel, John Green or Ricky Riordan are part of my life, and it sometimes seems like a dream… It’s as if I were watching a movie where I’m one of the main characters, but I can hardly believe it’s real. I guess it’s the magic in my job, that you enjoy knowing you can give big stories a shape, you can help make writers dreams come true, and most of all you can make the book world grow, or at least that’s the purpose. I guess this world is a bit mythified, but when you’re in it, I think we mythify it ourselves and that’s why we keep hanging on to it sometimes.

And speaking of MYTHS, but another kind, this week, Rick Riordan’s saga is coming out to the market; THE SWORD OF SUMMER is a new MAGNUS CHASE series, where he’ll introduce us to Viking “myths”, with these interesting and shuddering adventures, like he’s done with his previous sagas like PERCY JACKSON and THE HEROES OF OLYMPUS. 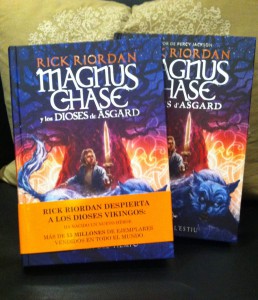 Magnus Chase has seen his share of trouble; he’s lived alone on the streets of Boston, trying to avoid both the police and the truant officers. One day he discovers he has someone else chasing him down: his mysterious and newcomer uncle Randolph, who reveals an impossible secret; Magnus is really the son of a northern God. The Viking’s myths are real. The Gods of Asgard are preparing for the Great War. Trolls, giants and horrendous creatures are preparing for Ragnarok, the end of the world. With help from Sam, a Valkyrie who secretly hates him, Blitzen the dwarf and Hearthstone the elf, both fugitives, Magnus will travel through the nine worlds searching for the only weapon that can stop Ragnarok: a legendary sword that was lost thousands of years before… And on the way he’ll have to make the most difficult decisions; because sometimes, in order to save yourself, you have to die.

Penguin Random House keeps betting on an author with the brilliant idea of taking mythology to the field of adventure and therefore making the perfect cocktail.