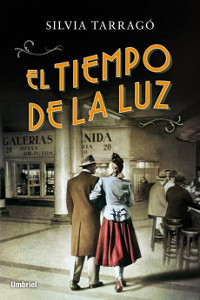 Ever since their inauguration in 1940 as the first subterranean galleries in Europe, the luxurious Avenue of Light has been a mirror for the changes in the Barcelona of the post war.

Julia, a young made that just got to the city, will begin a romance with a train supervisor from Sarriá and, a few years later, a forbidden passion that will bring them terrible consequences. She will be a witness to the evolution of the gallery throughout time and of some of the traders like Rosita, daughter of the owners of the bakery, who will live her first love with the attendant at the Avenue of Light movie theater, while she dreams with the learner of the barber, involved in political activities.

A lady of mysterious fortune who opens a typewriter shop. A perfumer who’s involved with powerful men in the regime. A railway worker who writes poems while he walks between the columns. These are the characters that make up a world that keeps changing, decade after decade, following the exciting beat of Barcelona from the postwar till the end of the eighties.