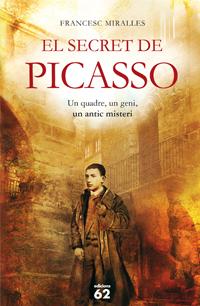 THE SECRET OF PICASSO

1898. Young Pablo Picasso is in Horta de Sant Joan, then called Horta d’Ebre, a rural town in southern Catalonia. After wandering with a friend several weeks by wild forests, vast gorges and icy torrents, he decides to stay in a cave, where they sleep on a bed of grass and eat rice cooked on a bonfire. Near this cave Picasso meets a fifteen-year-old Gypsy painter boy with whom he has a brief affair. Before their separation, the villager gives him a sketch that shows the hiding place of an Arabic treasure hidden in 1152. According to the gipsy, he had seen it in a dream where it was prohibited, under threat of death, to try to dig it. More than a century later, a mighty art critic will ask journalist Leo Vidal to track the whereabouts of “the secret of Picasso”. An adventure that will take him to study the clues the painter left in his works and to know the environment of the famous painter. An exciting novel, based in real documents, that shows a completely unknown Picasso who practiced shamanism and was introduced into the mysteries best kept in a territory so untamed as isolated and legendary: the deep south of Catalonia and Matarrana, in Aragon.