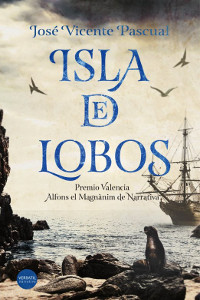 Seamen inhabit the enclave of Isla de Lobos, which comes a castaway without memory but past. Little more than a tongue of lava and black stones, a rock between seas is the very place where are main characters a geographer, a Santero, a counter wave and a lady who rules with an iron hand the destinies of the insula, plus Emerald mulatto woman and her daughter Albabella, talking with sea lions and lives in a cave.

And a volcano that watches the designs of those who dwell time that mirage, the small scrap of land and jetties in the middle of the ocean, little more than a mustard seed fallen on the tablecloth immense sea.

In this universe of closing, on which it weighs an inescapable curse, the appearance of a nameless man and naked on the beach sand, thrown by waves, pose a threat to try to conjure imposing an almost impossible task. As he complies, forces greater than those of a mortal quietly working to change the fate of Isla de Lobos, this border does not appear on maps and almost is not in the world.

“With the imagination of Garcia Marquez and prose Carpentier, José Vicente Pascual shows that banks are discovered in the literature.”

“A waste of imagination, with an absorbing prose, exuberant, capable of combining humor and drama. A reading pleasure. “