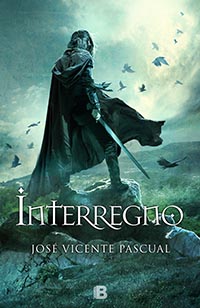 At the beginning of the 5th century, with the Roman empire practically in shatters, the people in the northern Iberian peninsula, and the tribes, clans and Eurasian nations that have invaded it, are fighting bloodily for supremacy.

The pervading ancient animist cult, and the Celtic religion’s association between spirituality and the forces of nature, as well as sorcery and magic, face the classic deities and, especially, the new Christian faith.

Berardo de Hogueras Altas, from his rich city in the sheltering Cantabrian mountain apex, summons his neighbors and allies to establish a dominion to be defended by a powerful army. They have to face the threat of the Asding Vandals, and the savage Alan parties that devastate the region. They also will defend themselves from the plans of the covetous Hermeric, king of the Suebi, who from his throne in Bracara Augusta intends to take possession of all the peninsular north. Their most fearsome enemies, though, might turn out to be the intrigues for power, and treachery.

Berardo’s call is answered by the brave mountain-dwellers of Gargantas del Cobre, the hunters of the Eione valley, the fierce warriors of Pasos Cerrados … They all know which destiny awaits them: the times of the sword, and legend.

«José Vicente Pascual masters a rich, fluid, and very neat prose, aided by a great wealth of words. He can introduce us skillfully to the setting through a language that transports us into the story from the very beginning.»

«The strength of the story, and its lively and swift rhythm, make the reading of this work very agreeable, exciting … It is the result of merging high-brow and entertainment literature, perfectly inscribed in the epic – historical genre.»

«José Vicente Pascual, undoubtedly, is an alchemist of the written word.»

«… one of those novels that you never want to end … Very rarely, in the course of many years as a reader, you come across literary exercises like this author’s.»