LETTING GO OF THE PRESENT TO GET TO KNOW THE PAST

There are moments in life where you’d like to run away. Leave everything behind and flee from a present that you don’t like, that it isn’t what you want. However, there aren’t many brave people who dare to break free from everything and pursue their dreams, their wishes, their freedom. I’m an example of that. I’m not brave enough to run away without a clear goal –I guess because I don’t have an acute need to do so. However, I learn each day that when one is convinced of what they do and why they do it, everything flows way better, although the path to put it into practice is long, hard, and needs some time to mature. 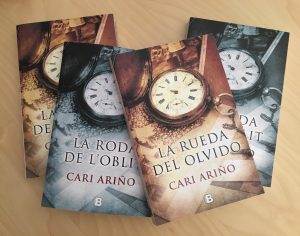 It’s difficult to change suddenly what you’ve learnt or have been imposed since you were a kid, but not for the protagonist of Cari Ariño’s latest novel, Alicia, who after suffering a heartbreak, she goes to France searching for the grandfather she never met. She’s brave and breaks free from her life in order to carry on and move forward. There, she’ll meet Julien, a bohemian tour guide, who will put her in contact with Baptiste, who’ll tell Alicia about his past as an exiled. The story of the three characters will connect with the mystery of Biel, a missing anarchist after the escape of the Spanish Civil War losers. Biel gave up the love of his life and his daughter (another difficult decision, I don’t know if it’s brave or not, but it is indeed a complicated one). Alicia and Julien like each other, but the past they start discovering will test them, a test on which their future will depend.

A heartfelt novel that hooks you and makes you fall in love with these brave characters, who are kind of long-distance runners –which we all are, more or less, in this life–, and that move towards truth, forgiveness, and the discovery of one’s self. These three things are, most of the time, hard to understand, but love and hope can heal mistakes and wounds from the past.

Cari Ariño moves a step forward with this second novel, because although the story has an historical background very interesting, the plotline and the characters are what keep you at the edge of your seat, which makes that this book is perfect for readers of historical books and anyone who enjoys a brave story, well written and with HUGE characters, that hold your hand and don’t let you go until the very end. Her first novel, EL LATIDO DEL TIEMPO, was already a big success, and with this second novel, LA RUEDA DEL OLVIDO, her readers will be even more loyal to her and will catch newer ones, without a doubt.