The school year is about to finish. Another year over, they all think, and three months ahead of holidays. I wish I could have them now! I remember saying to my parents, when it was summer that I was bored. Today I think that I’d love to have some time to get bored —look how things change! When you have a kid, who is almost a teenager, you start to see how important it is to them to be part of the group, and how with new technologies they’ve lost all oral communication, and are able to say many things through the phone, but nothing while looking on the eyes. This is a double-edged sword, and kids who are constantly doing this have to learn how to properly use these technologies, because in some cases it can be really harmful what one writes in a WhatsApp group. No one likes to be the weird one of the group, although maybe someone prefers it and it’s their choice in order to isolate themselves from something they dislike, as in the new novel by Francesc Miralles. In TÚ ERES LA NOCHE (‘You’re the Night’), we discover a group of people who can’t or doesn’t want to see the sunlight. They’re not vampires, but they live underground during the day, separated from the world we know. 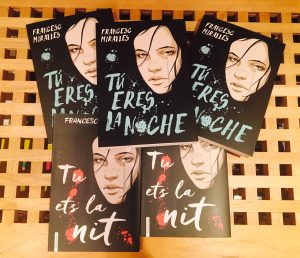 The main character, Rai, meets by accident an undercover club that is frequented by those who have decided to live against the sunlight and live at night, among which we can find Lucia, an eighteen-year-old girl with self-destructive tendencies who Rai feels really attracted to. A week there is the minimum time to become an initiated, two weeks of access into The Cage of Darkness, a well under the Catacombs where darkness reigns and it’s possible to do the final test. Will Lucia be a part of the underground group? Will Rai be able to blend in for her, and leave behind his life?

This is a love story, about understanding and misunderstandings, that will appease all young readers and Miralles’ fans, who with his previous novels as well, such as PULSACIONES or RETRUM, talks about feelings of people who aren’t part of the ‘normal’. But do we know what is normal nowadays? That’s why I loved this novel, and I believe we all should read it, because Francesc, masterful as always, puts on the table really meaningful themes that will hook you in, and you’ll fall in love with the well-developed story between Rai and Lucia. Congratulations, Francesc, you’ve done it again. A delightful novel that can be dark at the same time, with the perfect dose so that everything happens for a reason.