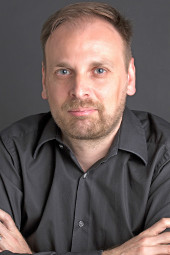 Francisco J. Tapiador was born on 1973 in Valladolid, and graduated in Philosophy and Arts. When he was 22 years old, he published his first story in Difácil Publishing House. In 2002, he was awarded the Bridport Prize of Poetry (Dorset, the UK). He’s published his poems in English and Spanish in Babab and Octavo: The poetry quarterly of the Alsop review. His poetic anthology, Balaje y Verdemar, has been published by Renacimiento. He’s also author of an essay about El Quijote published by Crítica. His first two novels, Míster Señor Brown and Emily, o los juegos del poder, were published by Plataforma. He’s been a guest to the universities of Cambridge, Paris, Colorado, Oklahoma, Mannheim and the California Institute of Technology (Caltech, JPL/NASA). He’s a doctor in Quantum Physics, and from 2012 he’s dean of the Environmental Sciences Faculty of the Castilla-La Mancha University (UCLM), where he teaches Physics and Climate Change. He’s also a professor in the Architecture School of UCLM, where he teaches Science and Contemporary culture.