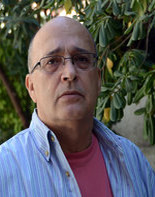 Jesus Locampos was born a journalist in León, and opened his eyes, at fourteen, in Paris; he grew up and reproduced in Madrid, where he exercised his profession by directing Diez Minutos until 1991; afterwards he was the Director of Nuevos Proyectos and Assistant Director of Lecturas until 1998, and he created and directed Sorpresa!  until 2007. He landed in the weekly press as a graphic humorist; in the daily press as columnist for the agency Colpisa (publishing in fourteen newspapers “La ventana indiscreta”); in radio as a rule-breaking reporter for “Acción 80” and “Cita a las cinco”; and into television as a scriptwriter for ““El canto de un duro”. He was the youngest journalist to be appointed director of a gossip magazine, and the only one in Spain that to fill the positions of Director and Assistant Director in three separate magazines of the same informative segment.

For three years he was a regular contributor to the TV show “Sálvame”.

Currently he writes a regular section for the Sunday supplement “Hoy Corazón”, in the Spanish newspaper ABC.

He has published three books: Yo acuso along with Chelo García Cortés; and on his own Adúlteras (Grand Guignol), and El Candelabro y otras anécdotas del corazón (Martínez Roca, Planeta).