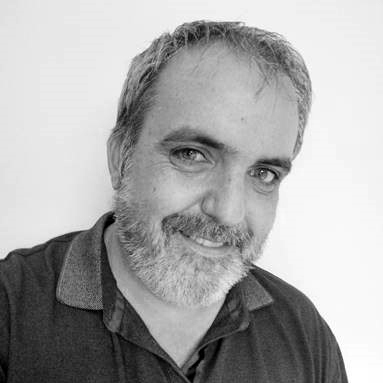 David Marín Rubio was born in Barcelona (1974) and since 2008 he lives in the region of La Noguera. He studied journalism in the Autónoma University of Barcelona and he is linked to the newspaper El Punt Avui since 1996. Nowadays, David works in the culture section for La República and he also collaborates with El Punt Avui.

This 2019 he was awarded the Crims de Tinta Prize with his book Purgatori (La Magrana-RBA), a thriller settled in the Pyrenees that revolves around the return of a descendant from La Vella Rugalla, a woman from la Vall Fosca condemned for witchcraft centuries ago. This is the second book of the Rull series, inaugurated in 2015 with Mala lluna.

In his novels he mixes the urban atmospheres with the rural world, but from a modern and complex point of view, away from the clichés. David explores topics such as the paternity, the impossibility of coming back to the past or the fight between desire and reason.

David teaches journalistic writing in the Degree of Audiovisual Communication and Journalism at the University of Lleida, and he also collaborates as a writing teacher at the Writing School of Lleida.